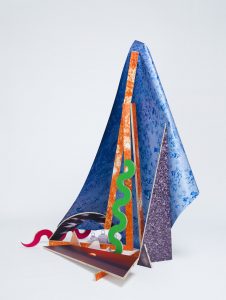 To coincide with Art Basel Hong Kong 2018, K11 Art Foundation (KAF) is pleased to present Emerald City, a group exhibition that will bring to life a cross-section of artistic approaches to rethinking geometry in relation to the connectivity of universal knowledge through space. The exhibition will show approximately 40 artworks across multiple genres of art, including painting, sculpture, video, photography, and site-specific installation in Cosco Tower and chi art space in Hong Kong, exploring how geometry, the “measurement of the Earth (geo),” has influenced our imagination of the world.

Through a number of successful collaborations with some of the world’s top cultural institutions, KAF has facilitated the deepening of international audiences’ understanding of Chinese contemporary art since its establishment in 2010. As the first major exhibition curated and produced solely by KAF, Emerald City demonstrates its mature development as a cultural institution by illustrating the fruits of its extensive academic research and offering its unique perspective in connecting cultural exchange through inter-regional and trans-generational artistic discourses.

Emerald City’s conceptual origin is reflected in the inclusion of a number of key artists and works that they created in the last two decades of the 20th century. The 1980s and 1990s saw a huge-scale reimagining of global connectedness, which led to the emergence of art movements including Neo-Geometric Conceptualism (“Neo-Geo”) in the US, Rational Painting in China, and Japanese art before Superflat. The common threads of creative exploration that run through these movements offer insight into the potential for cohesive creativity formed in isolation.

The inclusion of pioneering Neo-Geo artists Ashley Bickerton (b. 1959) and Peter Halley (b.1953) highlights the conceptual nature of the movement, which rejected commodification of art and sought to use geometric dialectic of inside/ outside as a metaphor for the metaphysical fine line between art and commodity. Works by these two artists will be exhibited alongside a number of sculptures by L.A.-based artist Carl F. Cheng (b.1942), whose works in the 60s and 70s sought to create ecosystems within the confines of boxes in portable sizes. Cheng’s microwave-sized Erosion Machine (1969) mimics nature by allowing the viewer to witness the erosion process of sedimentary rocks enclosed in a box in the scale of handy domestic appliances.

Most contemporary artworks conform to the confines of geometry due to the formal limitations of traditional art media—the canvas, the screen, the lens. Emerald City seeks to illustrate the persistence of geometric thoughts in contemporary society, in both our cultural output and social constructs, by positioning artworks such as Keiichi Tanaami’s (b.1936) “The House in Ascension” sculpture series_A (1986) alongside newly commissioned works by young artists, such as Nik Kosmas (b.1985). Kosmas has created a site-specific, large-scale climbing frame, similar to those found in recreational areas globally; the installation will invite visitors to explore their physicality and the space surrounding them in accordance with a man-made, geometric structure based on the idea of functional asymmetry. Other new commissions include works by Oscar Chan Yik Long (b.1988), Mountain River Jump! (b.1985), Zhang Ruyi (b.1985) and Doris Wong Wai Yin (b. 1981).