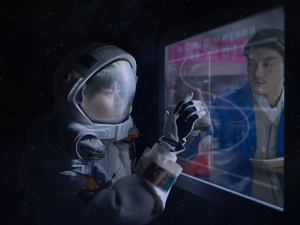 Along with numerous other virtual exhibitions across the world, KAF has joined hands with Serpentine Galleries to present a series of moving image artworks at NOWNESS.com. Focusing on one artist and artwork each week, this special moving image programme brings together a group of East Asia-based practitioners, launching on 3 April with Cao Fei’s short film, Same Old, Brand New (2015), followed by work from Zheng Yuan, Kim Heecheon, and Hsu Cheyu, with more artists to be announced.

Same Old, Brand New is a work by Cao Fei that references video games, primarily from the 1980s, which have become an integral part of popular and youth culture in Hong Kong and across the world. With this video installation, Cao Fei attempts to turn collective memories into a current reality.

The work follows Cao Fei’s previous multi-media projects that explore the dreams and aspirations of a younger Chinese generation and their strategies for overcoming and escaping reality. Cao Fei mixes social commentary, popular aesthetics, references to Surrealism and a documentary approach to reflect on the rapid and chaotic changes that are occurring in Chinese society today.

Visible from numerous locations across Hong Kong, including the HKCEC, Same Old, Brand New could be witnessed by people all over the city.

If the bitterness of life could fade from our memory, how hard it would be for happiness to do the same? Take it easy, take it simple and happy, we don’t have to take burden. Nothing is important any more. All that people need is to form a whole, to dance without care and catch the eternity of happiness in a twinkling.