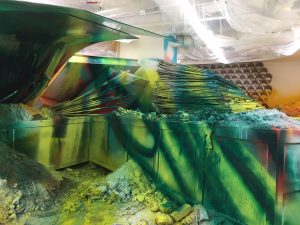 “A painting can land anywhere: on an egg, in the crook of the arm, along a train platform, in snow and ice, or on the beach.” –Katharina Grosse

Katharina Grosse is known for her use of the spray gun as her primary painting tool to create vast site-related paintings. She has passed strongly coloured swaths of paint across the walls of exhibition rooms, her own bed, a public billboard, an entire house and its surroundings, and different kinds of arranged objects such as piles of soil and tree trunks. Using the spray gun, she has been able to liberate the application of paint from its immediate connection to both the painter’s body and any predetermined surface. With colour she traverses the established borders of objects and architectural settings and creates a dissensual order of reality. Ultimately, Grosse’s painting practice not only reworks the divisions that cut across the visible world and are responsible for its familiar shape, but also the fundamental division between the visible and the invisible. Disregarding established functions, attributions, and hierarchies, her works function as prototypes that prefigure options to organise our lives in novel ways.

Divided into five zones at chi K11 art museum, Mumbling Mud leads visitors through an immersive, labyrinthine passage. Upon entering the first zone, they immediately find themselves surrounded by a constructed landscape made up of building materials and piles of soil, all covered with colourful paint. Spectators are invited to meander through the five zones by following the painterly traces that Grosse left when she worked her way through the museum. The amorphous, multicoloured forms and shapes sprayed across the varying structures and draping cloths installed at the museum may also create an experience of wandering on the peripheries of the familiar, inviting rumination into the quintessential strangeness of a metropolis that is ever-changing and impossible to be delineated in simple contours.

Katharina Grosse’s exchanges with Chinese artists relating to Mumbling Mud
Since July 2018, Grosse has travelled to China to meet Chinese artists whom K11 Art Foundation has previously worked with, including Cao Fei, Chen Zhou, Cui Jie, Li Ming and Zhang Enli, as well as prominent artist Zheng Guogu and award-winning writer Hao Jingfang. The trip has enabled Grosse and her Chinese counterparts to have in-depth discussions about art making and themes related to Mumbling Mud. “We are delighted to have Katharina Grosse’s debut in China and her generous sharing with the Chinese artists and audience, which accentuates K11 Art Foundation’s mission in fostering cultural exchange between the Greater China Region and the rest of the world,” says Adrian Cheng, Founder and Honorary Chairman of KAF. The conversations will be reproduced in the catalogue to be published as a form of documentation of the exhibition.