Jumex Museo: Cadu “I Am Mandela” 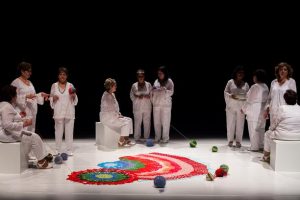 This collaborative project undertaken by Cadu (Carlos Eduardo Felix da Costa, Sao Paulo, 1977), between 2014 and 2016 in Mexico City, as part of his residency at Insite/Casa Gallina, an organization that, through the collaborations between its resident artists and the local community at Santa María La Ribera, seeks to “generate diverse gestures that might reveal points of both stress (fragility) and malleability (transformation) in the social fabric of the neighborhood.” In this context and throughout several prolonged stays, Cadu established bonds with communities of the Santa María La Ribera neighborhood that sparked an extended participatory project. I am Mandala is the result of the artist’s work with “Las chicas de ayer, hoy y siempre,” a dance group formed by senior women, and “Tejiendo Otro Mundo,” a collective of activist knitters.

Cadu’s project is representative of the themes that distinguish his work. The knitters created a pattern inspired by the symbolic structures of Tibetan mandalas that the dancers then unraveled through choreography. In this way the artist activated the collective sets of knowledge that brought these communities together. The project goes beyond the creation of a physical object to encompass the process of weaving bonds between individuals, something that cannot be easily represented. I am Mandala reveals a joint exploration of individual and group identities, gender and its corporeality, as well as spirituality.

Photo: courtesy of the artist