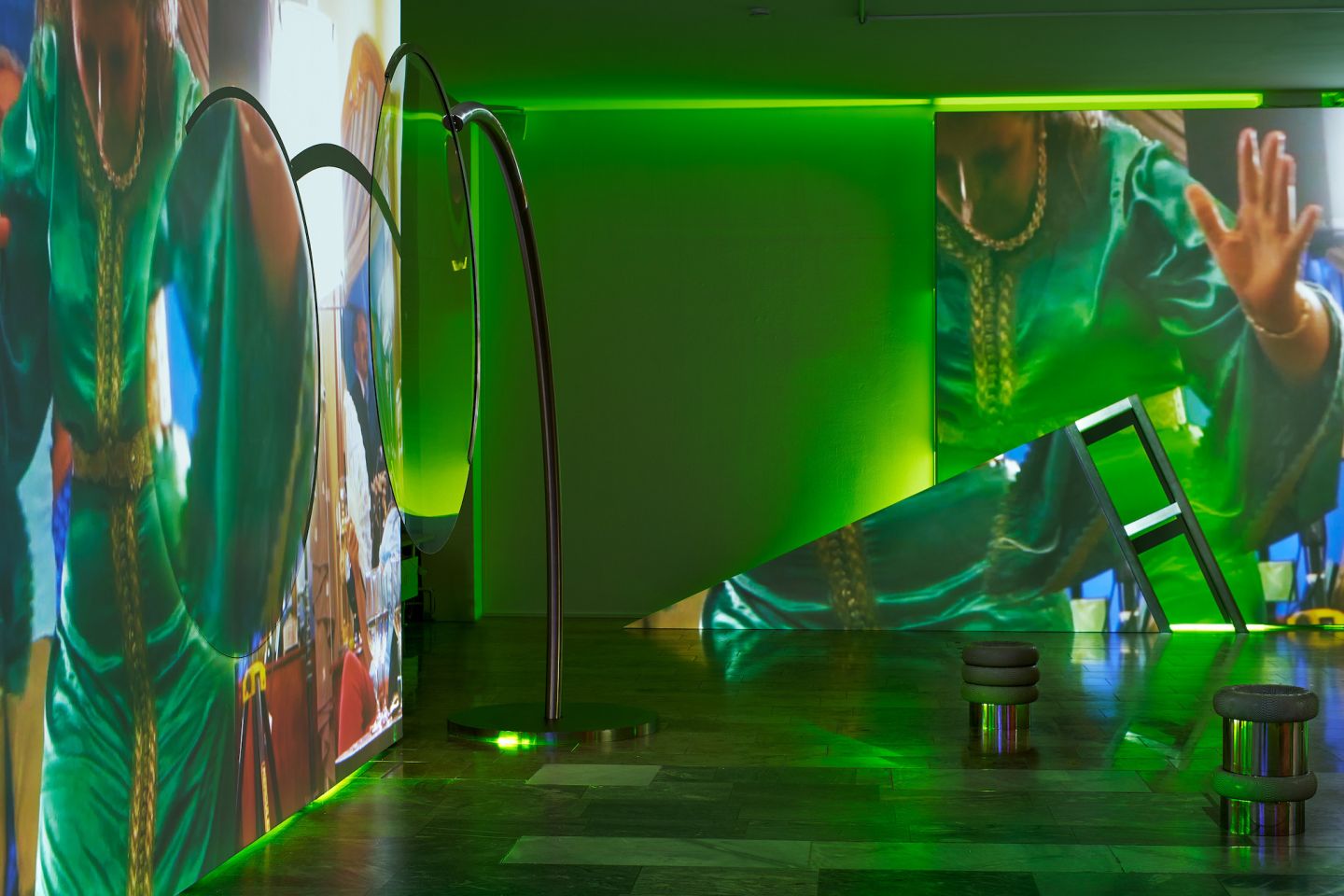 Meriem Bennani’s first solo exhibition in Germany will present Party on the CAPS (2018), an eight-channel video installation exploring displacement, resilience, and the relationship between identity and place. Conceived as a documentary set in a speculative future about daily life on CAPS, an island turned megacity in the middle of the Atlantic, where migrants are detained, the work amplifies reality through special effects and humor. Party on the CAPS highlights Bennani’s playful and unique visual language inspired by reality TV, YouTube, documentary, social media, and animation, examining the boundaries of what we regard as familiar and strange, real and virtual. For the exhibition at JULIA STOSCHEK COLLECTION, the screens and sculptural elements that make up Party on the CAPS have been adapted to the gallery space to create a large-scale and wholly immersive environment.

In the future world in which the island of CAPS (short for capsule) exists, teleportation has replaced other forms of travel, enabling bodies to easily move from one place to another. CAPS was established as a temporary holding area for illegal migrants intercepted mid-teleportation on their way to the US. The island is surrounded by a magnetic field, guarded by US troops, and subject to total surveillance, making it almost impossible to leave. Bennani’s docunarrative begins two generations after the establishment of CAPS: cut off from the rest of the world, the island has developed its own internal logic, currency, infrastructure, traditions, cuisine, and media. CAPS is characterized by a mélange of hybrid cultures—growing out of the myriad identities of its inhabitants, their makeshift living situation, and the dominance of digital technologies—and is populated by cyborgian, often injured, bodies adapting to and coping with the island’s oppressive environment and the aftereffects of teleportation.

Bennani, a Moroccan artist based in New York, conceptualized CAPS in 2017 while researching subatomic teleportation and in response to Donald Trump’s US travel ban. The work offers an acute political commentary on Western immigration and surveillance policies, summoning a dystopian reality only slightly different from our own. In the work, Bennani also pays tribute to human resilience, to difference, and hybridity by resisting essentialist notions of identity and culture, instead addressing the in-between and multiple states of life in the diaspora. As viewers we are witness to a celebration—or party—of collectivity and family.

PARTY ON THE CAPS is part of HORIZONTAL VERTIGO, a year-long program at the JULIA STOSCHEK COLLECTION in Düsseldorf and Berlin, curated by Lisa Long.