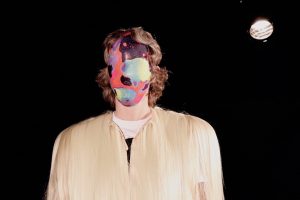 Ongoing Experiments with Strangeness is Pauline Boudry / Renate Lorenz’s most comprehensive exhibition to date. Spanning the ground floor and first-floor cinema of the collection’s Berlin gallery, the show comprises four large-scale moving image installations, stage elements, lights and sculptural objects that, according to the artists, experiment with possibilities “between protest and resistance,” a reference to Ulrike Meinhof’s 1968 essay “Vom Protest zum Widerstand.”

In their collaborative practice, driven by ongoing conversations about the subjects of performance and performativity, companionship, and resistance, Boudry / Lorenz excavate unrepresented moments and gestures in history, challenging accepted narratives and binary categories of identity and meaning. The moving image works featured in the exhibition—Telepathic Improvisation (2017), Silent (2016), I Want (2015), and To Valerie Solanas and Marilyn Monroe in Recognition of their Desperation (2013)—all draw on musical scores, scripts, and speeches, adapted and interpreted by performers. Collectively, the artists and performers explore the works’ various political and sexual potentials, adopting a non-hierarchical approach to their examination of their relationships among themselves and with the viewers.

Through their camera work, Boudry / Lorenz reflect the violent history of visualization, questioning who or what is seen and in return goes unseen, or unheard. By including objects from their films in the gallery space, the boundaries between the representational space of the film and the actual space of the gallery begin to dissolve. These on- and off-screen human and non-human encounters examine the limits of musical and filmic forms as protest and resistance, calling for an urgently desired future.