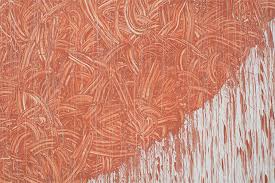 Donald Judd had great admiration for Richard Long’s radical work which, much like his own work, defies traditional conventions of form and medium. In 1988, after an exhibition in Reykjavik, Iceland, Judd acquired and permanently installed Long’s work, Sea Lava Circles, at The Chinati Foundation in Marfa, Texas. Located on a concrete platform that was previously used as a tennis court, Sea Lava Circles  is made from volcanic rock collected by Long while in Iceland.

For the temporary installation of two large-scale terracotta works, Long will use a terracotta slip to make works on the two east walls that extend the length of the building, measuring nearly 60 feet. Though Judd historically used the ground floor of 101 Spring Street for the exhibition of his work and others, Longs’s work has never before been exhibited in the space.

Judd wrote on Long throughout the 1970s and into the late 1980s, with regard to the location, process, and exhibition of an artist’s work; and the lack of such support in New York. For Judd, “Competent art made in a place should be shown in that place.” Further, in an essay regarding the current state of the European art world, Judd definitively stated, “… Richard Long is the best artist in Europe.” Select essays will be included in the forthcoming publication Donald Judd Writings, to be released in November 2016.