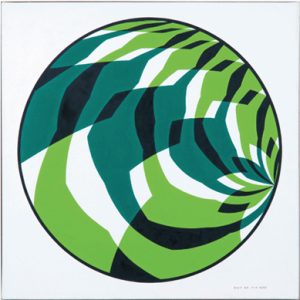 This exhibition, which will later travel to the Museum of Spanish abstract art in Cuenca, presents some 75 works of Hans Hinterreiter (Winterthur, 1902-Ibiza, 1989), Swiss artist linked to the particular art of the circle of Max Bill, together with a selection of documents that you allow rebuild research on color and shape from the constructive logic that this artist carried out throughout his life. The works on display come from the Hans Hinterreiter Stiftung, Zurich, and, to a lesser extent, from some private collections.

After studying mathematics and architecture, Hans Hinterreiter discovers in the 1930s the color theory systematized by the German chemist and nobel prize Wilhelm Ostwald. Thereafter, dedicated all its efforts to develop an own theoretical and practical approach that focuses on construction, at the suggestion of the own Ostwald, a Formorgel [a “body of the form”] and a Farbenorgel [a “color organ”], gadgets it allow you to obtain multiple formal and chromatic combinations from elementary geometric structures.

Hinterreiter published his studies on the shape and color in his books Geometrische Schönheit [geometric beauty, 1958] and Die Kunst der reinen Form [the art of pure form, 1978]. The catalogue of the exhibition is the first monograph of the artist in Spanish and includes original texts of the own Hinterreiter and Max Bill, as well as trials of Rudolf Koella, Karl Gestner, Timo Niemeyer and a text by Jakob Bill, collecting the correspondence Max Bill and Hans Hinterreiter