The Isamu Noguchi Foundation and Garden Museum: Koho Yamamoto “Under a Dark Moon” 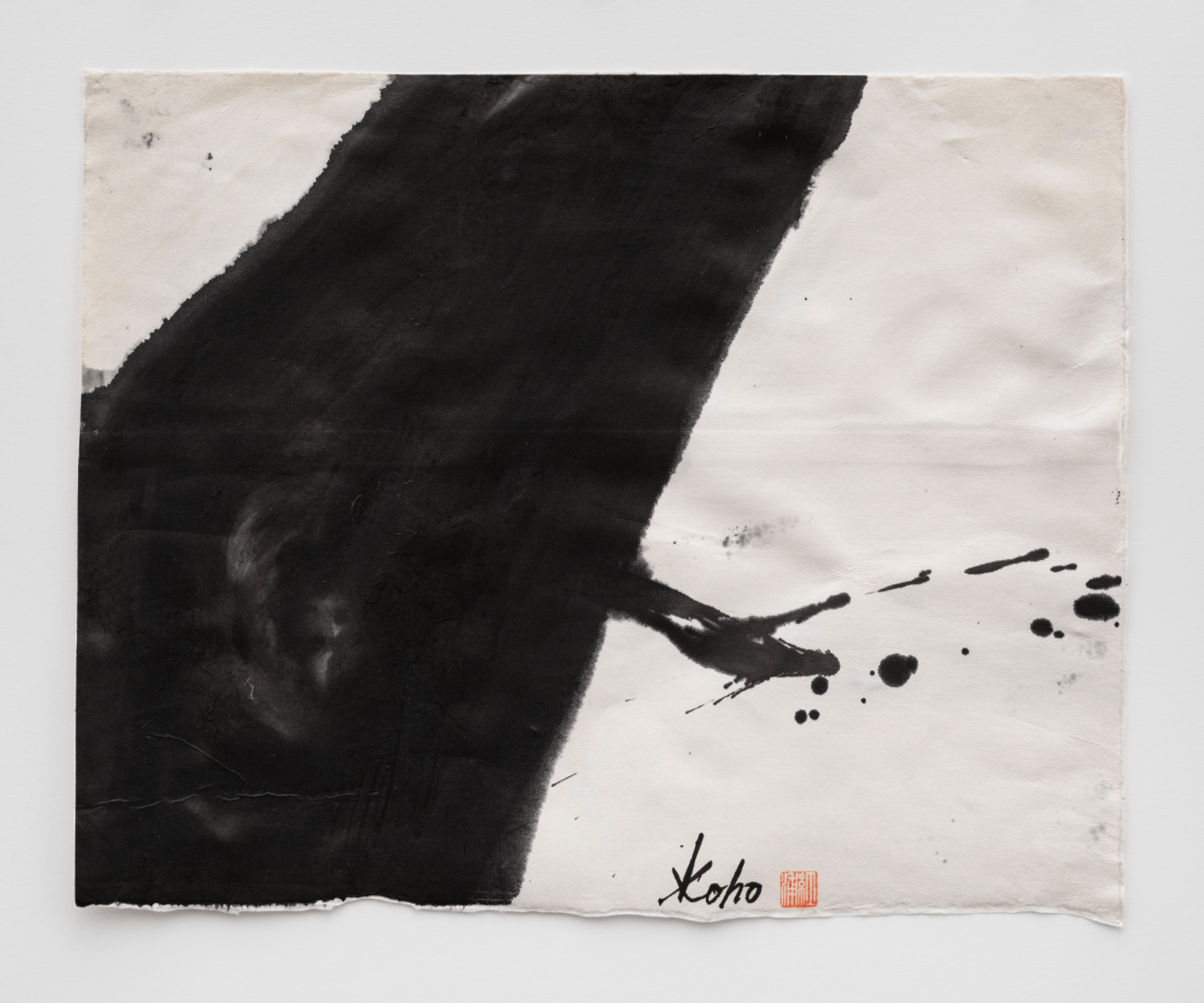 The Isamu Noguchi Foundation and Garden Museum presents Koho Yamamoto: Under a Dark Moon, a one-gallery installation of ten untitled works on paper by Masako “Koho” Yamamoto (b. 1922). Master painter and founder of an eponymous school in New York City where she educated generations of students in sumi-e (“black ink painting”) from 1974 to 2010, Yamamoto continues to work and teach privately as she approaches her ninety-ninth year. Because of her deep association with sumi-e and veneration as a teacher, her art has been almost totally unrecognized outside of that context. These dark abstract paintings, suggesting sublime interior landscapes, which she describes as coming “from nothingness”—from an empty mind—have not been exhibited before.

Masako “Koho” Yamamoto (b. 1922) came of age as an artist with a generation of nisei (the American-born children of Japanese immigrants) who admired Isamu Noguchi (1904–1988) because he made his complex heritage and life experience the basis of a uniquely American success story. Over the last half century, the name “Koho” has become synonymous with sumi-e (black ink painting) in New York City, where she has personally instructed hundreds of students seeking a way to be in the discipline of painting. Despite, but more truly because of, her close association with that tradition, she is almost entirely unrecognized, even among her greatest admirers, for what she is: a great postwar, abstract painter.

Yamamoto was born in Alviso, California, spent her early elementary school years in Japan, and returned permanently to live in the United States at age nine in 1931. Her father was a poet and calligrapher; her mother died when she was just four. During the Second World War, Yamamoto was forcibly incarcerated with her father and siblings in two of the prison camps established by the American government for residents of Japanese ancestry living on the west coast of the United States. First at Tanforan Assembly Center (San Bruno, California) and then in Topaz Relocation Center (Millard County, Utah) she studied with the celebrated Japanese American painter Chiura Obata (1885–1975). He gave her the name “Koho” (“red harbor”) derived from his own name (“thousand harbors”), in recognition of her skill. In the camp, she also received attention for her poetry. At nineteen she wrote this tanka (“short poem”) in Japanese: “Sometimes I wish I could jump into the turmoil of humanity and live life seriously.” Seventy-four years later that steely resolve had matured but was still finding its way into verse, “Don’t say I’m old / Don’t say I’m weak / I will kick you in the ass / I am a grand old soul of lioness.”

After her release from Tule Lake Segregation Center (Newell, California), Yamamoto moved to New York City, where she attended the Art Students League, painted, married, divorced, worked various jobs to make ends meet, and keenly followed the rise of Abstract Expressionism. In 1974 at the age of fifty-one, she opened a school to teach sumi-e on MacDougal Street on the border between Soho and Greenwich Village. While the school closed in 2010, Yamamoto has continued to teach privately. She will be ninety-nine in April.1

Yamamoto’s impact as a sensei (teacher/life guide) and cross-cultural ambassador has been immense and widespread. It was her students, friends, and followers who brought her to The Noguchi Museum’s attention and their devotion that made this exhibition happen. But her gifts as a teacher should not overshadow her formidable body of work. She is as driven to paint today as she was when she first recognized in art a means to freedom and freedom of expression. Her work combines a mastery of the techniques and traditions of sumi-e with an atomic era sensibility, an archetypal twentieth century biography of displacement, the brash bravura of postwar abstraction, and a disdain for the conventions of restraint her own teaching represents.

Yamamoto’s whole body of work is a deceptively harrowing embrace of the void in the form of irresolvable darknesses, the relentless passage of time, decay and disintegration. Her paintings cover a broad representational spectrum spanning calligraphy, landscape, still life, historical portraiture, and pure abstraction and reflecting the hybridity of her background and interests. She is particularly adept at painting microcosms that generate an indelible sense of place without providing comfortable points of purchase. In his own expanded field of sculpture, Noguchi called his own ambiguous floating environments mindscapes or imaginary landscapes. A favorite statement of Erich Fromm, copied in Yamamoto’s own hand and taped to the wall of the small room at home where she paints, reads “Creativity requires the courage to let go of certainties.” By turns lushly louring, stark, and explosively fragmentary, Yamamoto’s black paintings in particular, like the ones on view here, are steady visions from the psychic vacuum of the unknown: intimate and cosmic, specific, universal, and direct. “My painting comes from nothingness,” she likes to say, “but it has life to it.”

To celebrate Yamamoto as a sumi-e master is only right. It is an honor she welcomes after a lifetime of practice. But we also acknowledge the extent to which specificity of acclamation can itself be a form of prejudice, as in the epithet “great woman artist.” “Sumi-e master” is a gilded cage Yamamoto has worked outside of for decades. Her work stands atop the tradition, but is not contained by it. Long hidden in plain sight, her dauntlessness and perseverance are an unambiguous rebuke to the expectations and limitations to which she has been subject as a Japanese American woman.

This year of pandemic has been such a bewildering period for humanity. Not since the bubonic plague halved the population of Europe in the late middle ages or the splitting of the atom gave us the ability to threaten the existence of the planet itself, have we confronted oblivion as a species. What better time to recognize the creativity, fearlessness, and survival of an artist who has never been afraid of the dark.

1 For a complete compact biography, as well as a list of other sources, see Ben Kobashigawa, “Margie Masako ‘Koho’ Yamamoto,” Densho Encyclopedia.