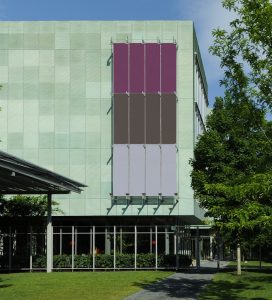 For the installation on the Isabella Stewart Gardner Museum’s Anne H. Fitzpatrick Façade, the Museum’s Artist-in-Residence, Boston-based artist Steve Locke, created Three Deliberate Grays for Freddie (A Memorial for Freddie Gray) as a statement about the issues of race and violence in America today.

Locke painted an abstract portrait of Gray, a Black American man whose untimely death after being in Baltimore police custody in 2015 aggravated long-standing racial tensions in the city and sparked street protests, police clashes, and violence.

Locke’s triptych contributes to an ongoing revision of Modernism as a movement devoid of political engagement. For the façade installation, Locke generated three distinct monochromes by averaging the pixels of three individual photos of Gray that were frequently in the media. One is a family photo; one is from his arrest; and one is an image of Gray in the hospital on life support. The resulting colors form a time line of the life, suffering, and death of Freddie Gray.

Born in Cleveland and raised in Detroit, Locke’s solo work has been exhibited at the Institute of Contemporary Art, Boston; the Museum of Contemporary Art Detroit; Mendes Wood in Sao Paulo, Brazil; and VOLTA 5 in Basel, Switzerland. His work has also been shown in New York, Pennsylvania, Savannah, Seattle, and Beijing. He is an associate professor at the Massachusetts College of Art and Design (Mass Art) and was appointed a visiting associate professor in painting at Yale University in 2014. He has a bachelor’s of science degree from Boston University and bachelor’s and master’s degrees in art from Mass Art.

Locke spent a month living and working at the Gardner Museum as an Artist-in-Residence in 2016, and he is the 12th artist to create a work for this public art space in the Museum. He will discuss Three Deliberate Grays for Freddie (A Memorial for Freddie Gray) on Thursday, September 13 at 5:15pm in the Museum’s Living Room. The program is free with Museum admission but space is limited.

The Artist-in-Residence Program is directed by Pieranna Cavalchini, the Tom and Lisa Blumenthal Curator of Contemporary Art, and is supported, in part, by the National Endowment for the Arts and the Barbara Lee Program Fund. Funding is also provided for site specific installations of new work on the Anne H. Fitzpatrick Façade on Evans Way. The museum receives operating support from the Massachusetts Cultural Council, which receives support from the State of Massachusetts and the National Endowment for the Arts.