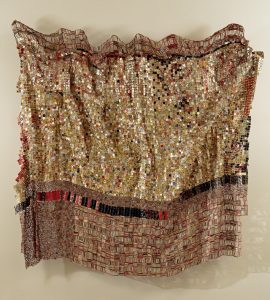 In the spirit of Isabella Stewart Gardner and her love of textiles, a special exhibition, Common Threads: Weaving Stories Across Time, will open this fall and will feature works by contemporary artists from around the world. These artists, many of whom have been Artists-in-Residence at the Gardner, are redefining textile art through mediums including music, video, and participatory art.

“In Common Threads, visitors will discover how tapestries, carpets, and other textiles carry the personal and political stories of artists and weavers from many different traditions and backgrounds all over the world,” says Pieranna Cavalchini, the Museum’s Tom and Lisa Blumenthal Curator of Contemporary Art. “This exhibition reminds us that artists today are redefining a traditional art form in multiple ways that prove the enduring appeal of the fiber medium.”

Collaborative practice, gift-giving, and storytelling are themes explored in the exhibition. Highlights include a digital multimedia installation inspired by Afghan prayer rugs; an opportunity for visitors to bring personal articles of clothing for mending; and a collection of weavings made by people all over the globe who followed the same set of instructions but ended up with very different results.

Award-winning composer David Lang’s true pearl: an opera, in five tapestries is a radically new form of opera. Inspired by Isabella Stewart Gardner’s sixteenth-century tapestries that tell the story of the first king of Persia, Cyrus the Great, the five-part “in-ear opera” is a private experience, available only through headphones in the Museum’s Tapestry Room. The “stage set” for each scene is an individual tapestry from the Cyrus series, and listeners are immediately immersed into tales of empire building and passion. Award-winning playwright Sybil Kempson wrote the libretto for David Lang’s opera, which will be performed by vocal project Roomful of Teeth and the Callithumpian Consort ensemble, conducted by Stephen Drury.

“Visitors to the Tapestry Room will experience our historic tapestries in a completely new way,” says Christina Nielsen, William and Lia Poorvu Curator of the Collection, “and will understand that the stories they tell are universal, and as provocative today as they were in their original setting. Everyone standing before the tapestries, listening to the opera through their headphones, will feel as though they are on stage themselves. They will literally be taking part in a drama that unfolds across the centuries.”

Another participatory artwork is Lee Mingwei’s (1999 Artist-in-Residence) Mending Project, 2009–17, an installation with multiple spools of thread and a worktable, in which visitors are encouraged to bring a textile in need of mending. While Lee and his volunteers mend the item, visitors can share stories and anecdotes about the textile, generating an intimate experience that blends narrative and textile arts.

The exhibition also includes more traditional tapestries. William Kentridge collaborated with the Stephens Tapestry Studio in Johannesburg, South Africa, to produce a series of works dedicated to porters, one of the world’s most nomadic workforces. Common Threads will feature the work called Porter Series: Russie d’Europe (Man with bed on back), 2006–2007. Elaine Reichek’s (2001 Artist-in-Residence) work, Paint Me A Cavernous Waste Shore, 2009–10, combines literary and artistic interpretations of Ariadne, the mythological character who helped King Theseus defeat the Minotaur by giving the king a thread to follow his way out of a labyrinth. The carpet, by Flanders Tapestries, was woven in Wielsbeke, Belgium.

Other components of the exhibition challenge the notion of what constitutes a textile. El Anatsui, a Ghanian artist who lives and works in Nigeria, used flattened metal slats from re-purposed liquor caps to make Many Came Back, 2005. Stitching the caps together with copper wire allows the metal to bend in softly draping folds, giving the work its sculptural property. The work, on loan from the Newark Museum, has many correlations to African history, including the demand for rum as one of the goods exchanged in the transatlantic slave trade.

As Artists-in-Residence at the Gardner Museum in 2010, Raqs Media Collective were inspired by two small bronze Han Dynasty bears in the collection to produce Great Bare Mat, 2012. The carpet, which was woven by a team of expert weavers of the Rodopski Kilim Carpet Factory in Bulgaria, riffs on the subject of “bears” and depicts the Great and Little Bear constellations. The stars in the rug conjure the sky above, which appears to watch over the humans sitting below, telling and retelling many stories. The Han Dynasty bears will also be on view during the exhibition.

“At the Gardner, we believe in the power of the collection to inspire the creativity of contemporary artists and connect viewers across time and place to ideas that resonate with our own lives today,” said Peggy Fogelman, the Norma Jean Calderwood Director. “In this exhibition, we celebrate the enduring relevance of our extraordinary tapestries and the meanings they hold for artists and visitors around the world.”