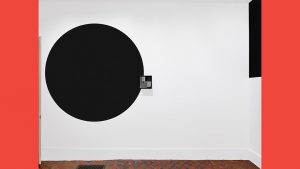 Adam Pendleton’s exhibition considers the relations between (geometric) abstraction, blackness, and languages of collectivity. Three basic shapes—square, triangle, and circle—are the refrains in this room-sized installation.

Pendleton is a New York-based artist known for work animated by what the artist calls “Black Dada,” a critical articulation of blackness, abstraction, and the avant-garde. Drawing from an archive of language and images, Pendleton makes conceptually rigorous and formally inventive paintings, collages, videos, and installations that insert his work into broader conversations about history and contemporary culture. His work is held in public collections including The Museum of Modern Art, New York; Solomon R. Guggenheim Museum, New York; Carnegie Museum of Art, Pittsburgh; Museum of Contemporary Art, Chicago; Museum of Contemporary Art, San Diego; The Studio Museum in Harlem, New York; and Tate, London, among others.