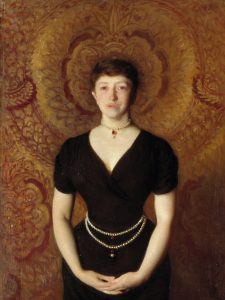 The novels of Henry James paint a vivid tableau of American expatriate social and artistic life at the turn of the last century. This exhibition, the first to explore in depth the intersection between James’s friendships with American artists and his writing, brings together nearly fifty works, including paintings on loan from museums across the United States and Great Britain, as well as a selection of photographs, manuscripts, letters and printed books from the Morgan Library and Museum in New York, where the exhibition originated, and the Isabella Stewart Gardner Museum’s own art and archival collection.

These works illuminate the creative exchanges that took place in artists’ studios and grand salon—in Boston, Florence, London, Venice, and elsewhere—between James, Gardner, and other luminaries in their overlapping circles, including John La Farge, John Singer Sargent, James McNeill Whistler. The work of several female artists in these same circles, including the painters Elizabeth Boott Duveneck and Lilla Cabot Perry, speak to the complex roles of women in society at the time as eloquently as the words penned by James about his memorable female protagonists.