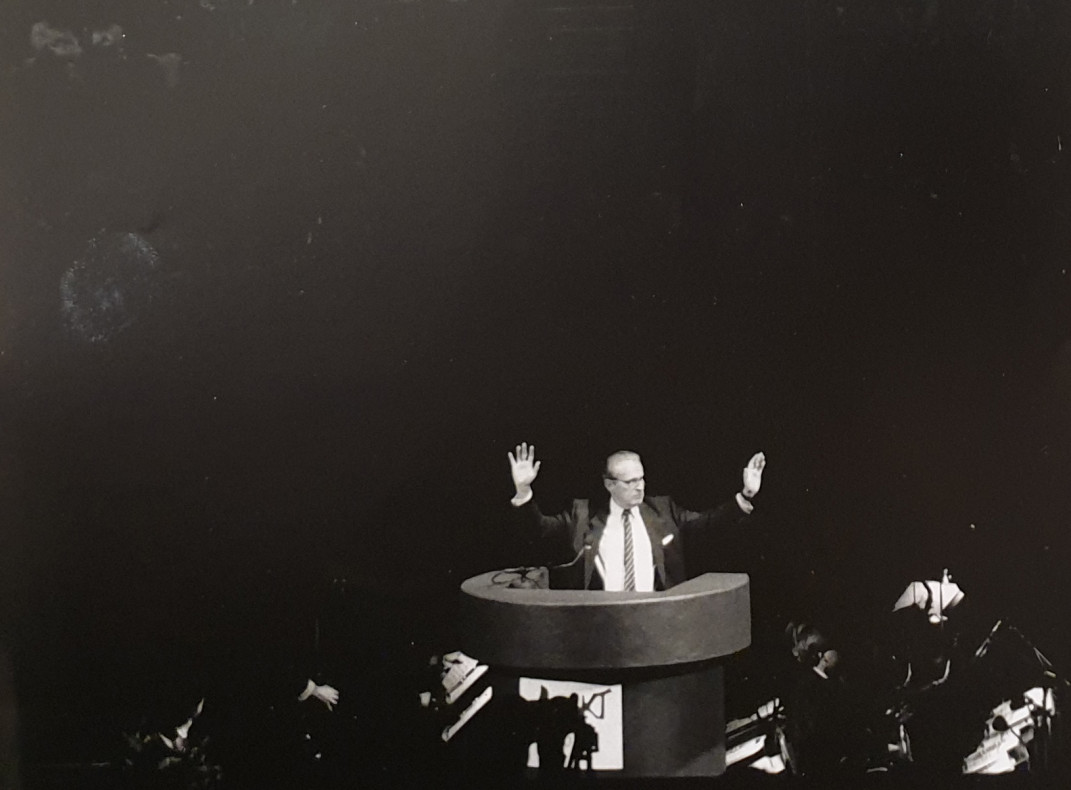 Nathalie Gabrielsson’s The Campaign investigates ideological behaviors in Sweden during the 70s and 80s which transformed the foundation of the social model and affected the definition of Swedish national identity. Industrial and commercial powers established a network of think tanks which led a hidden revolution, aiming not only to change the political agenda, but also the perception of reality and the notion of truth. Their strategies were based on storytelling using a specific dramaturgy. Every attempt to define and recognize what happened as a centrally organized campaign has been dismissed as a conspiracy theory.

In her work, Nathalie Gabrielsson uses artistic practice to share complex criticality. Art is understood as a field between subjectivity and objectivity; capable of simultaneously being a sphere for experimentation and for the definition of politics. The Campaign focuses on a specific historical situation and context, but the narrative around it can move through time and space, becoming both a mirror and a grammatical system we can use to confront reality. What can also be seen is how extremely successful this lobby from the 70s and 80s was in the implementation of their goals: Swedish society got a new vocabulary, still in use today.

The construction of the narrative voice – and the specific aesthetics of this voice – is extremely important in this project: some visual languages are received as more truthful than others, some are perceived as rigorous experience and knowledge. It is between the sender of this controlled aesthetics of language and the receiver that a contract of veracity is established, providing a feeling of truth.

Nathalie Gabrielsson utilizes business aesthetics to negotiate a possible dialogue regarding the construction of politics and history. This specific visual language affords Gabrielsson a position similar to that of the lobby within the umbrella of SAF (the Swedish Employers’ Confederation). From today’s perspective and with the actualized aesthetics of economic powers, Gabrielsson defines new ways of perception. The language of business is not that far removed from artistic institutional language. Both languages could be defined by their conceptual phrasing, specific vocabulary; both also operate as invisible tools, supporting informal power structures with the aim to define reality.

With this exhibition, Index Foundation almost becomes a Russian matryoshka with Kybernein Institute inside. Kybernein Institute is a cultural platform operating at the intersection of art, business and politics. Now, with Index and Kybernein sharing space and time, we can observe two types of institutional languages, a dialogue and negotiation on how to work with narratives and concepts.

Nathalie Gabrielsson (Sweden, 1986) produces performances, videos, texts and installations. In 2014 she founded the research structure Kybernein Institute (KI) to address the overlaps between policy making and cultural production. Through the production of exhibitions, performances and events, KI explores how narratives become policy; how ideas formed by language, text, and image are ultimately implemented through acts of politics.

Index thanks Bonniers Konsthall for their support.