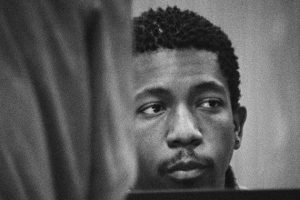 This new film by American artist and filmmaker Kevin Jerome Everson is shot on 16mm black-and-white film over the course of the recent American election day, 8 November 2016, in Charlottesville, Virginia. The film follows the poll workers throughout their day as they carry out the practical tasks that allow citizens to cast a ballot and vote.

The film’s focus is not documentary or narrative in a traditional sense, but relies on the conditions and gestures that make up the rituals of democracy. It opens with the oath of allegiance, “to prevent fraud, deceit and abuse”, the mainly Black American workers go through actions that repeat, and people come in and out of view. Through Everson’s lens, the audience takes part in that election day and the way in which the characters of the film conscientiously perform the labour of the voting model that shed new light on the current political situation. Since we now all know the outcome of this election, the scenes that Tonsler Park depicts come to emphasise the contradictions and struggles that continue to exist throughout Western democracies, and the deep-set socio-political divides that shape the contemporary commons.

Everson is one of the most prolific filmmakers of his generation. His subject matter are always, as he describes it, “the gestures or tasks caused by certain conditions in the lives of working class African Americans and other people of African descent.” He says further: “I’m considering a process, the way conditions affect people.” Characteristic of Everson’s films is the way they combine scripted and documentary elements with the traditions of experimental film. His work grew out of an interest in street photography, and his films have a sense of being with the subject, rather that looking from a distance.