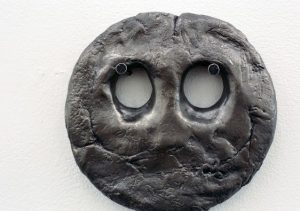 This exhibition of recent work by Sidsel Meineche Hansen with its the joint title of the exhibition and a mobile application, that is activated an by a number of wall-mounted sculptures on display, entitled Hollow Eyed (#1-8),  explores the relationship between digital technologies and the automation of contemporary working conditions. Through the production of the OVER app, the artist critically examine the infrastructure and ideologies behind app-based business models – exemplified by how on the one hand Uber’s App-based business model both cut the “dead mile” (literally the unpaid drive on the way to the customer, and the gap between client and service operator) in an allegedly frictionless space of connectivity and on the other waive its workers’ rights based on the imperative of the “sharing economy”.

In the exhibition, a series of wall-mounted sculptures function as trigger-objects for the app. The sculptures, cast in silicon metal, most commonly used in the manufacture of microchips and shaped as distorted emoticons, activate a layer of animation through a smartphone camera. Superimposed on to the space of the exhibition, the animation narrates a short script spoken by an anonymous A.I. robot that reflects on augmentation in parallel to new forms fascism. The logo of the Augmented Reality app visually mimics the logo of Uber’s car service and is inscribed with an anti-fascist symbol. In addition to the logo, a third piece Anti-fa (2017), also made from the same material as the sculptures, hangs from Index’s façade in order to physically demarcate the space. The artist’s reuse of such blunt symbolism is not to make ‘antifascist art’ but to contribute to existing oppositions to the echo-chamber of extreme right content within the digital realm, by highlighting the correlation between virtual and physical space.

OVER continues previous works by Hansen that examine virtual space as a continuation of capitalist reality. The exhibition includes a zine-style reader titled OVER ON UBER, which gathers articles and other relevant reading material on issues of labour, automation, sexism and racism in digital and app-based economies, exemplified by Uber’s controversies.