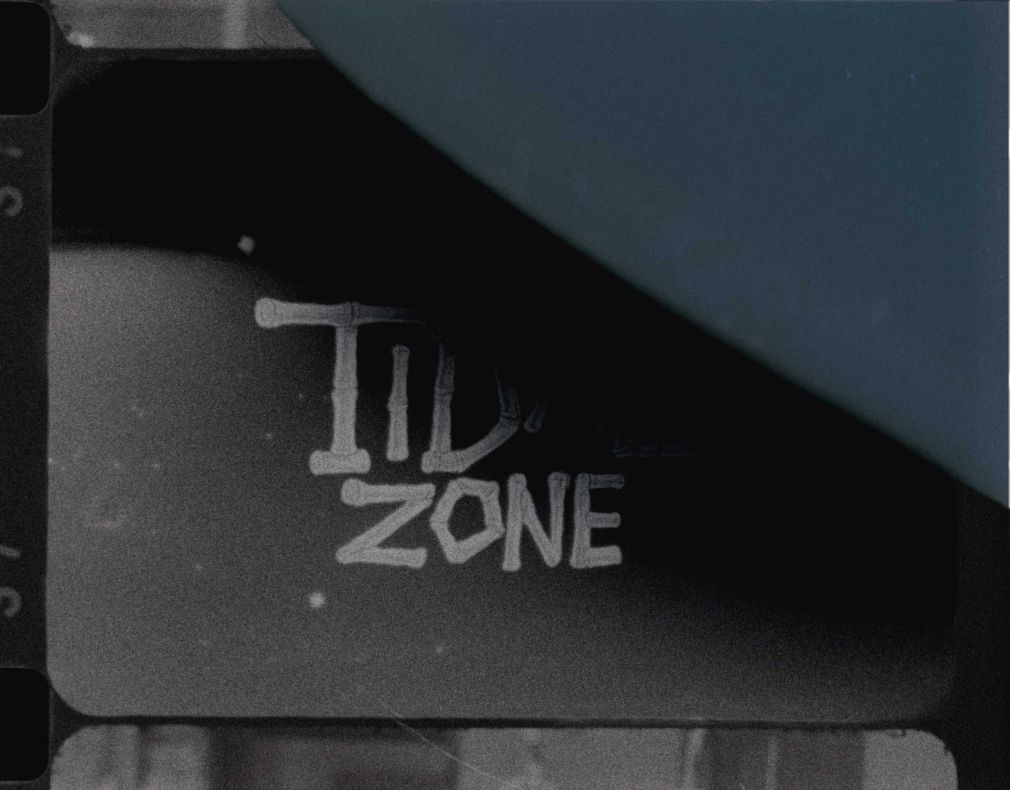 In THE TIDAL ZONE, Kajsa Dahlberg offers a series of connections between the individual and the collective, structures and bodies, reception, and perception. Observing historical material (in process) and juxtaposing it to specific subjective narratives, Dahlberg weaves multiple discourses where the emotional and the political become unstable arenas in permanent negotiation.

This is how radiation looks like.1 Time, traces and sounds of radiation become part of filmic material included in Dahlberg’s project and research around physical reactiveness. The unseen radioactivity, pollution and invisible particles become visible and auditive due to the chemical structure defining the characteristics and functionality of traditional film. Before the digital realm, film needed time and chemical reactions to document reality which is composed of many layers and several types of information — being visible is just one of the layers of its composition. The chemicals used in film offer unexpected visual vocabularies and modified textures. It is like a body that is alive, and its nature is affected by context and climate and the documentation of a specific moment becomes a continuity of processes and interactions.

In the film, It Is Not Even True That There Is Air Between Us, Kajsa Dahlberg works with voices, narrations and amplified perceptions while The Tidal Zone, is a compilation of film bringing to the surface observations on seaweed, the fragility of the filmed material, bodies as observed subjects, preconceptions of relationships with nature and the instability of the document itself. Both films establish a connection between montage and construction, mixing technique with personal and scientific content. The image itself is an affected material of expression that is performing both at a theoretical and a physical level.

Pollution, constant inhaling.2 It is not only chemical-based films that are bodies reacting to external elements. The work, It Is Not Even True That There Is Air Between Us, reveals how the developments and promises related to industrialism included pollution as a necessary factor for production, with human bodies becoming living archives of industrial history revealing how we are also affected by economics and politics, and how our bodies react as chemical vessels and test sites. In this connection between the body, pollution and economic systems, some individuals physically react more than others. Highly sensitive persons can’t turn off their multiplied perception of the world; invisible chemicals and molecules define for them a place that is more than here and now, a world where visibility is not necessarily the key element for approaching reality.

But how to approach this intricate relationship between images, objects and subjects? How to observe several temporalities and political positions? In the exhibition, the interview-based film, The Spiral Dramaturgy, offers a vocabulary that is related to non-linearity and storytelling that is a fierce struggle for surviving. During a long interview, Ulla Ryum jumps from the strong need for a narrative to a continuous, mixed flow of words regarding the Sámi population, Swedish film production, north and south, Roma minorities, circus, dramaturgy, memories, inclusivity, gender, emotions and multiple ways to tell a story.

Taking her research as a starting point, Dahlberg worked with PRAKSIS (Oslo) and Index to organize a residency titled Nature Scribbles and Flesh Reads. Taking place in Oslo throughout March 2022, the residency gathered a group of artists through open call. The group collectively researched relationships between the body and the environment, with a particular focus on the impact of chemicals and toxins on human and non-human bodies. The group has since continued to work together.

In 2006, Dahlberg presented at Index the exhibition A ROOM OF ONE’S OWN/A THOUSAND LIBRARIES. Sixteen years later, the artist is back at Index with the same desire for collective knowledge and shared experiences.

Kajsa Dahlberg is a visual artist living in Oslo. She received her MFA at the Malmö Art Academy, Lund University, 1998-2003 and was a studio fellow at the Whitney Independent Study Program in New York, 2007-08. Dahlberg’s work has been shown in exhibitions at the Neuer Berliner Kunstverein, the Museum of Contemporary Art in Roskilde, CA2M in Madrid, and Lunds Konsthall. Her contributions to museums and biennials include works for Moderna Museet, Stockholm; Malmö Art Museum; 8 Bienal do Mercosul; Manifesta 8; and GIBCA 2019. Kajsa Dahlberg is a PhD candidate at the Royal Institute of Art in collaboration with Lund University.

(1) Sentence extracted from Kajsa Dahlberg’s film, It Is Not Even True That There Is Air Between Us, presented in the exhibition.