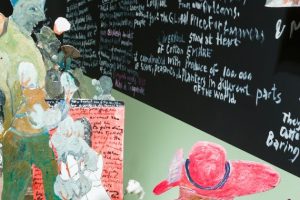 Index presents an exhibition by Anna Boghiguian, the first solo presentation of the artist in Sweden. In a large-scale installation, Boghiguian uses drawing, sculptural elements and wall-texts to trace the long history of global cotton trade. Woven Winds interweaves histories, facts and everyday observations to describe a geopolitical condition where goods and people circulate globally, in a complex narrative of power, equality struggles and migration.

Cotton has been grown and traded since antiquity, and is one of the world’s earliest mass-consumer commodities. While spice and tobacco established earlier trading routes, the nineteenth century cotton economy was the first large-scale manufacturing industry with workshops that can be seen as precursors of modern day sweatshop production. The massive growth of America’s early economy was largely based on cotton and depended heavily on exploitation of human labour and land, and the commodification of people as slaves. Cotton is a nowadays ubiquitous material. It played an important role in the modernization of cities such as Cairo, Mumbai and Shanghai. Current estimates for world production are about 25 million tons annually, accounting for approximately 2.5% of the world’s arable land.

Woven Winds maps the beginnings of the global markets that are today a defining structure of capitalism and global politics. The installation can be read in relation to contemporary political issues, such as global trade and international trade agreements post-Brexit and the election in the US, and the continuing exploitation of cotton-based industries. Large companies such as Hennes & Mauritz and its subsidiaries Monki, Weekday, Cheap Monday, COS, & Other Stories that produce consumer goods with a short life-span while overlooking harsh working conditions in favour of maximizing profit.

Anna Boghiguian was born in 1946, an Armenian in Cairo, but never adopted the city as her only home. Living a nomadic life, the artist has constantly moved between different cities across the globe, from Egypt to Canada and India to France. She continues to have a conflicting relationship with the city today, immersing herself in her work in the sights and histories of places. Besides cotton, she has investigated subjects such as the history of salt trade and the life of Egyptian Greek poet Constantin Cavafy.