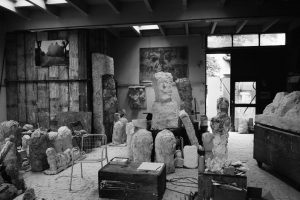 The first monographic show in Italy dedicated to Swiss, German-born sculptor Hans Josephsohn (Königsberg, 1920-Zurich, 2012), curated by ICA Milano director Alberto Salvadori, is the second exhibition of the institution’s programme and it is produced in collaboration with Kesselhaus Josephsohn (St. Gallen, CH).

The exhibition features a considerable number of artworks spanning from the ‘50s until the early 2000s. The selection includes works in brass, clay and concrete, belonging to the different typologies through which Josephsohn classified his artworks: heads, semi-figures, standing figures, reclining figures and reliefs. The exhibition also comprises preparatory sketches and a docufilm investigating the artist research and creative process.

Born in 1920 in Eastern Prussia from Jewish parents, Josephsohn left Germany in 1937 and settled in Italy to study art. Although due to fascist racial laws he had to move in Switzerland—his adoptive country—his relationship with Italy remained strong and he often returned after the end of the war, especially in those areas of central Italy where he had encountered Etruscan art. Josephsohn was captivated by the vividness and formal abstraction of such ancient art, which created strong resonances in his works.

Through his sculptures, which appear as assemblages of diverse viewpoints of the same subject and mind maps that bring together different visions of the human figure settled in memory, the artist developed a language capable to talk about the fragile relationship of mankind with the surrounding world.

In conjunction with the retrospective dedicated to Hans Josephsohn, the ICA Milano project room hosts Galleria dell’Ariete. Una storia documentaria. The project, curated by researcher and professor of Contemporary Art History Caterina Toschi, is the first edition of Gallery Focus: an exploration of Italian art galleries from the ‘50s until today aiming to bear witness and discuss the decisive role played by gallerists in the success of contemporary art in Italy in the post-World War II.

Founded by Beatrice Monti della Corte, Galleria dell’Ariete had a fundamental role to raise awareness of contemporary art in Italy. Its history is reconstructed through a variety of archival documents, including catalogues, exhibition posters, artworks information sheets, correspondence, magazines and photographs.

The gallery focused on works by living artists, both Italian and international. Among the Italian artists that exhibited at Galleria dell’Ariete were Lucio Fontana, Carla Accardi, Piero Gilardi, Piero Manzoni, Fausto Melotti and Mario Schifano as well as Michelangelo Pistoletto and Gilberto Zorio from the Arte Povera group.

Beatrice Monti established professional relationships and friendships with some of the most prominent American art gallerists, including Leo Castelli, Paula Cooper, Martha Jackson, Sidney Janis and Betty Parsons, facilitating the affirmation of Italian contemporary art in the United States while also presenting in Milano the works of American artists such as Jasper Johns, Jackson Pollock and Cy Twombly.