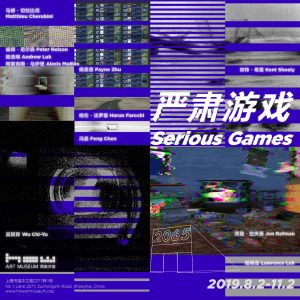 HOW Art Museum (Shanghai) is pleased to announce that the group exhibition Serious Games will be on view from August 2. Serious Games will present works and projects of both artists and game designers, casting light on the historical development of video games as a form and image, the tension between the mechanism of eSport competition and players from a bio-political point of view, as well as the critiques of spacial politics, historical truth, and future conflicts within the context of video games. Moreover, the exhibition is not limited to present the works directly related to video games, and it also attempts to extend the boundaries of people’s notions of game by showcasing works from different perspectives.

As an ancient form of human activity, games have been undergoing drastic changes under the development of science and technology. Until the era of video games, its unprecedented connection with daily life has opened up new possibilities for cognitive space, images and life forms. It has even launched challenges to the present and future way of people’s existence. However, in stark contrast to the radical evolutions of the contents and forms of video games and its enormous number of users, games have not yet received enough “serious discussions” because of its natural connection to entertainment.

“Serious games” refer to video games not only for entertainment purposes, but also applied in fields such as education, medical care and social management, etc. Hence, such games are generally referred to as “applied games”. However, the exhibition, Serious Games, doesn’t intend to make the distinction between “serious” and “entertainment”. On the contrary, the exhibition seeks to break the stereotypes surrounding video games, trying to investigate video games within the context of the current political dimensions where lines are blurred between machines and human beings, reality and virtuality.

Game theorist and critic Ian Bogost once pointed out that“we must begin to understand what games can offer us today: how they can serve as a mirror that presents a new view of our own experience of the world rather than as an window polished to an incrementally greater shine, facing that same green pasture of familiarity.”  In today’s web interface, even those who never play video games are already video-gamers. It’s all about how we define game and its meaning to us. Through the revolution of perspectives, interfaces, and operations brought about by video games, along with games’ continuous inclusion of elements of war, violence and pornography, they will repeatedly and increasingly intertwine themselves into our daily lives.

This is not a game only in the dream. Nothing is more serious than the game .