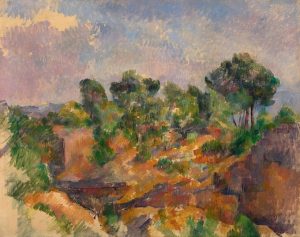 The Hôtel de Caumont Art Centre will be presenting masterpieces from the Justin K. Thannhauser Collection, bequeathed in 1963 to the Solomon R. Guggenheim Foundation in New York.

For the first time, around fifty major works from this prestigious collection will be presented in Europe in an itinerant exhibition that began in the Guggenheim Bilbao Museum: paintings and sculptures by the masters of Impressionism and post-Impressionism, as well as the major figures of modern art, from Manet to Picasso, and Degas, Gauguin, Cézanne, Van Gogh, Braque, and Matisse.

Justin K. Thannhauser (1892–1976), a leading figure in the dissemination of European modern art, was the sponsor, friend, and promoter of innovative artists who transformed Western art at the end of the nineteenth century and the first half of the twentieth century. In his youth, he helped his father, Heinrich Thannhauser, to run the famous Moderne Galerie, which was founded in Munich in 1909. Father and son developed a remarkable programme of exhibitions that featured the work of French Impressionists and post-Impressionists, as well as contemporary German artists. The gallery also held one of the first major retrospectives of Picasso’s oeuvre in 1913, and this helped to forge a long and close friendship between Justin Thannhauser and the artist.

In 1941, Justin Thannhauser moved to New York and soon established himself as an art dealer in the United States. As he had no successor, he bequeathed the major works in his collection to the Solomon R. Guggenheim Foundation in New York. They have since become some of the most important works in this major museum, where they are displayed in a gallery that bears the name of their legatee. This bequest considerably enriched the body of works by Cézanne in the New York museum, which until that point only had a single work by the artist: l’Homme aux bras croisés (Man with Crossed Arms, circa 1889). The collection of works by Cézanne owned by Thannhauser will be displayed at the Hôtel de Caumont, and includes the work Bibémus (Bibémus Quarries), which will return for the first time to Aix-in-Provence, where it was painted circa 1894–1895.

The exhibition brings together other emblematic works: major paintings by Picasso such as Le Moulin de la Galette(1900), an exceptional loan from the Guggenheim Museum, as well as masterpieces by Van Gogh and Manet, which have been restored to their former splendour, thanks to a recent restoration campaign that was conducted specifically for this exhibition.

The exhibition also gives visitors a chance to retrace the history of the galleries and the Thannhauser Collection via photographs, inventory books, and other archive documents held in the gallery’s collection, which illustrate the relations between the Thannhauser family and the avant-garde artists, collectors, and dealers of the time.