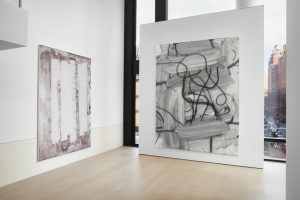 Maybe Maybe Not presents an emblematic selection of the work of American artist Christopher Wool. It inaugurates the exhibition program of the Hill Art Foundation, a cultural center conceived to offer broad public access to the seminal collection of contemporary and historical works assembled by J. Tomilson and Janine Hill over the past four decades.

Since coming to prominence in the 1980s, Christopher Wool has conducted a richly nuanced investigation of the possibilities of pictorial composition. This presentation of paintings, works on paper, photographs and prints encapsulates.

the evolution of the artist’s career, ranging from early experiments with readymade forms in his pattern and word paintings to more recent explorations of spontaneous gesture and digital intervention. Threading through Wool’s use of stenciled flowers, wildly looping spray paint, passages of violent erasure, and silkscreened apparitions of his own past imagery is a tension between freedom and constraint that has always animated his work.

Photography has long played an integral role in Wool’s practice, and this exhibition debuts two new photographic series. Whereas his previous work in the medium focused on scenes of alienation and degradation in the urban landscape, this more recent production documents the landscape of West Texas, where the artist has a home. Employing a disarming convergence of exposures, Yard locates unexpected sculptural vignettes in the ramshackle detritus surrounding semi-rural dwellings, while Road captures empty stretches of rough, overgrown track in which a destination is always deferred.