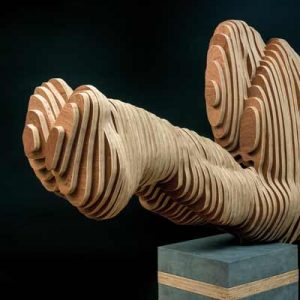 The strong physical presence and attraction of Marti de Greef’s sculptures is central to his body of work. Even though his sculptures have become increasingly abstract over the years, the play with shape ratios and volume never leads to the estrangement of the source and origin: the body.

What is striking in the work of Marti de Greef is the way in which he dramatizes his figures and fills them with strong emotions and impassioned movement. And at the same time, the way in which he charges his figures with energy, power and an uncompromising element sometimes. Feeling, emotion and passion linked to energy and power. How does Marti de Greef unite two such seemingly contradictory aspects? The answer lies in Marti himself.

His heart is ruled by passion, it is moved by his feeling and emotions, but in his shoulders, his arms and hands lie the steely muscles developed over years of heavy labour in the foundries. And he adds both elements to the clay and the wax out of which he models his work.

And there is yet another aspect. The artist is not afraid to deform his figures. Sometimes he accentuates body parts by strongly enlarging them, while other body parts are truncated or even omitted. Thus Marti proves himself to be a true artist. He raises his work above the level of the simple reproduction of reality. More importantly, with his omissions he achieves a language of form which is independent of the world which impinges on us. By enlarging, truncating or even omitting, the artist creates an autonomous form which accentuates and sublimates the perception of beauty.