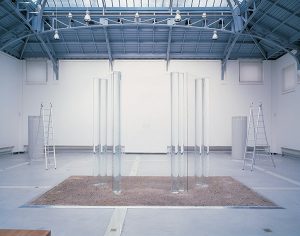 The exhibition is part of the continuity of the project presented by the French artist at the Palais de Tokyo in Paris, in February 2017. Emmanuel Saulnier then focused his sculptural work toward a free and spontaneous gesture, to escape the constraints of the material for the benefit of the poetic flight, in references to the famous musical improvisations of Thelonious Monk.

Chanting the space in three time like a partition, his works, which mingled wood, bitumen, ink or glass, formed a landscape to the scale of the place. Echoing, the works presented in the Forum – paintings, photographs, drawings and videos – will also be dialogue with the works of artists invited by Emmanuel Saulnier due to their proximity and fruitful dialogues between them.

Emmanuel Saulnier’s work echoes historical and tragic events, encouraging us to question the true nature of what motivates us as humans. Invited to work in situ at Le Forum, he continues his existential exploration with a striking, musically inspired project that’s part improvisation, par reflection.