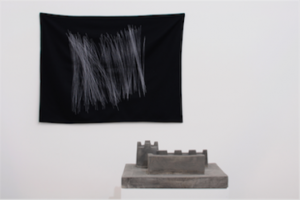 A large embroidery piece redefines the topography of La Verrière, dividing it into two distinct spaces. The seemingly opposing worlds of Douglas Eynon, on the one side, and Erwan Mahéo, on the other, come together as a global installation and a metaphor for the future of the city of Brussels, under the auspices of the exhibition’s eponymous, mysterious company.

One is British, aged 27. The other is French, aged 48. Superficially, their aesthetics have little in common besides Brussels itself, the city where they both live, at the heart of an increasingly attractive, diverse, cosmopolitan art scene. Instigated by La Verrière’s curator Guillaume Désanges, the exhibition is an opportunity for the two artists to devise a work for a shared space in the manner of a two-part vocal score, paying subtle tribute to the city that unites them.

The show’s title, Novelty Ltd., is open to interpretation: novelty as ‘innovation’ or ‘a cheap trinket’. Erwan Mahéo’s minimal, functional presentation suggests a tertiary-sector office space. His central embroidery retraces the plan of the exhibition as a background motif: a representation of La Verrière within the gallery space itself. Reached by a tunnel, Douglas Eynon’s world unfolds on the other side of the textile work. Cloudforms, a play of mirrors and a mysterious small house offer a symbolic, dreamlike counterpoint to Mahéo’s work, in this two-person diptych.

Guillaume Désanges sees both artists as reflecting the dual aspect of the oxymoron expressed in the title of the current series at La Verrière: Ballistic Poetry. Douglas Eynon is poetic in his handling and execution, and ballistic in his capacity to touch us without words, while Erwan Mahéo’s work is ballistic in its programmatic intent but poetic in its dematerialisation of the world.

The shows’ multiple facets are those of Brussels itself: once the cradle of Surrealism and now the administrative epicentre of the European Union.