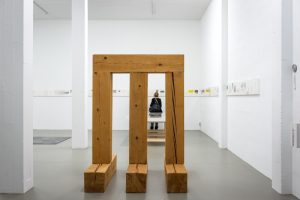 In 1973 Annick and Anton Herbert were brought into contact with the German art dealer Konrad Fischer via Fernand Spillemaeckers (Galerie MTL). In Düsseldorf, Fischer had opened an exhibition space for international avant-garde artists a few years earlier.

The Herberts meeting with Fischer resulted in the first purchase for their collection: 64 Lead Square (1969) by Carl Andre. The vision of both Fernand Spillemaeckers and Konrad Fischer significantly influenced the further development of the Herbert Collection in the following years.

With the exhibition The Konrad Fischer Years / 1964 – 1978, The invitation cards, publications and archive documents that are presented, situated in the period 1964 to 1978, not only emphasise the progressive and international character of its many projects and exhibitions. They also reflect the inspiration and dedication of Fischer in creating an international basis for the young generation of artists in the 1960s and 1970s.

The presentation takes place in Room 4 of the exhibition Time Extended / 1964 – 1978. Part II and will lead to an extensive publication, which will be available later in 2018.