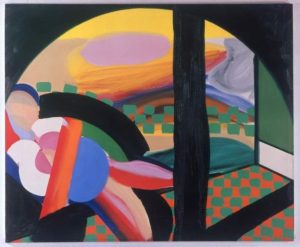 Howard Hodgkin (1932 – 2017) is widely regarded as one of the world’s greatest painters and has occupied a central place in contemporary art for over half a century.

This is the first comprehensive exhibition to explore the enduring influence of India on Hodgkin’s work, a place he returned to almost annually, since his first trip to the country in 1964, over 50 years ago.

More than 35 works are on display, painted over the last 50 years, which characterise the colour and warmth of India and capture the artist’s sensory impressions of the country – from fierce blazing sunsets to heavy oppressive rains, landscapes and cities he has visited, and portraits of the people he befriended. They range from Hodgkin’s earliest India-inspired paintings of the 1960s through to new works completed early this year. It will include a number of paintings that have never before been exhibited in the UK.

Rarely seen photographs and documents from Hodgkin’s personal archive are presented, including material relating to his 1992 British Council commission in New Delhi with the architect Charles Correa, as well as journals kept by the artist documenting his journeys in India, which are on public display for the first time.

Works from the artist’s personal collection of Indian art, which first led Hodgkin to visit the country and provoked his enduring love affair with the place and its people accompany the exhibition.

Speaking in 2016, Howard Hodgkin said: ‘I fell in love with Indian art when I was at school, thanks to the enterprising art master, Wilfrid Blunt. I longed to visit India, but only managed to do so in my early thirties. It proved a revelation. It changed my way of thinking and, probably, the way I paint. I am excited by the idea of this exhibition and delighted it will take place in David Chipperfield’s remarkable building, The Hepworth Wakefield, where I greatly enjoyed the show of paintings by Stanley Spencer.’

The Howard Hodgkin: Painting India exhibition takes place as part of the UK-India Year of Culture. In 2017, the UK and India are hosting a major bilateral year of cultural exchange, to celebrate their shared long and rich history.