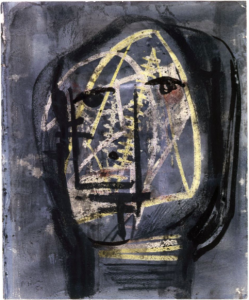 Henry Moore is best known for his sculpture: for his large scale bronze works on display in cities throughout the world, for his semi-abstract carvings and representations of the female form. But it was, in fact, thanks to an exhibition of his Shelter drawings at the National Gallery in 1942 that Moore first received widespread recognition in Britain. This new exhibition, featuring over 150 drawings, explores his prolific career on paper.

Starting with his life studies of the 1920s and ending with the rarely seen, but surprisingly fine late drawings of the 1970s and early 1980s, Henry Moore Drawings: The Art of Seeing will guide you through a continually expanding range of ideas, techniques and formal languages. This long-overdue exhibition will include examples of preparatory studies and ideas for sculpture, prints, studies and copies of works by artists Moore admired (from Picasso to El Greco, Rembrandt and the French Impressionists), studies of the human figure, animals, the landscape and the weather, portraits, designs for textiles and magazine covers, and a large representation of Moore’s more famous drawings – the two series in which he chronicled wartime Britain.

Moore was an exceptionally talented draughtsman, producing a body of nearly 7,500 drawings over seven decades; this exhibition will explore the many different ways in which he used drawing. He found that its eclecticism and ease of use made drawing an ideal medium for a wide range of purposes: from a tool to study natural forms or the work of other artists to means for the development of new sculpture, or as a way to experiment with languages and techniques. However, for Moore drawing was not merely a means to an end, but also a medium for finished artwork in its own right – so much so that he was sometimes referred to as a ‘sculptor and painter’.