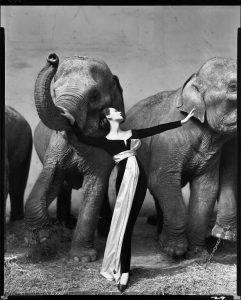 Richard Avedon’s portrait and fashion photography helped define America’s image of style, beauty and culture in the second half of the 20th century.

Richard Avedon was born in New York City in 1923. He attended DeWitt Clinton High School in the Bronx, where he co-edited the school’s literary magazine, The Magpie, with James Baldwin. At the age of twenty-one, Avedon began working as a freelance photographer, primarily for Harper’s Bazaar, where he became a student of the legendary art director Alexey Brodovitch. He also made formal portraits for publications in Theatre Arts, Life, Look, and many other publications.

Though well known through his fashion photography, Avedon is also celebrated for extended portrait cycles such as of the American Civil Rights movement, his large mural portraits, and his groundbreaking project In the American West. His first museum show was held at the Smithsonian in 1962, and many other major museums followed. His first book of photographs, Observations, with an essay by Truman Capote, was published in 1959. Avedon dies while photographing a project called “Democracy” for the New Yorker during the 2004 presidential election.

In consideration of the current global and political landscape, Avedon’s America is a decidedly timely exhibit, focused on the United State and its disparate people. The breadth of the portraits on view inspired a deeper understanding of the many characters, ideas, and relationships that shaped the cultural discourse of the second half of the 20th century.

This will be the first major exhibition presenting Richard Avedon (1923-2004) in Norway. As one of the greatest photographers in the 20th century, he is particularly famous for his fashion photographs and portraits.

In collaboration with the Richard Avedon Foundation.