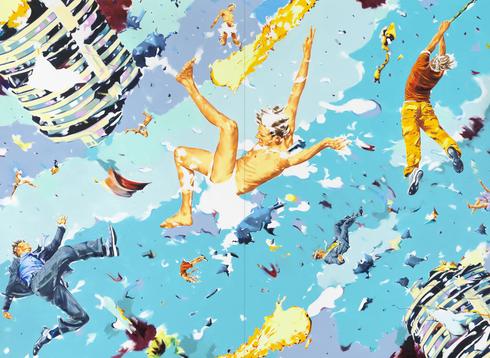 The Hall Art Foundation, together with König Galerie, is pleased to present a series of exhibitions centered around the works of artists living and working in Berlin.

Berlin kommt nach Niedersachsen will be comprised of four exhibitions. The exhibitions will be opened by Klaus Lederer, Deputy Governing Mayor of Berlin and Senator for Culture and Europe in Berlin.

At once highly inclusive and selective, Szene Berlin can be considered as a form of institutional critique—exemplified by Monica Bonvicini’s well-known work, Corner Boy (2015). In this piece, a column fastened in black leather belts appears as an isolated totem standing alone in a room. The inaccessible mirror placed at its top, casting a reflection onto the ceiling, symbolizes the rigid, yet ultimately vacuous social structures that create gender-based biases, which, in turn, pave paths for discrimination.

The variegated assortment of artists in Szene Berlin refuses to privilege any one perspective over another. Norbert Bisky stands out as an artist who travels the lifeblood of the Berlin art scene. With aesthetic roots tracing back to the fall of the Berlin Wall, he makes colorful, image-laden paintings through which he explores the intermingling of Communism, religion, and the state. Corinne Wasmuht, for her part, presents an almost mystical intuition of spatial development. In her works, what comes to light is the glitchiness of our digital age, and how the digital screen can enhance our sense of architectural form.

Related solo exhibitions by Katharina Grosse, Karl Horst Hödicke, and Johannes Kahrs round out the Berlin kommt nach Niedersachsen series. In their respective ways, these presentations demonstrate how urban life, science, and nature have come to be incorporated into the practice of artists closely associated with the city. Innumerable artists have chosen Berlin as their home, as the comparably low rent and spacious studio opportunities in a central location offer immense production possibilities. The intent of Berlin kommt nach Niedersachsen is to demonstrate Berlin’s fertile ground for artistic production.