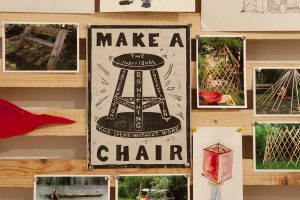 This exhibition, a project by Tamás Kaszás (1976, Dunaújváros, Hungary), the artist’s first solo exhibition in Portugal, brings together a group of works that, departing from an imminent scenario of ecological and economic collapse, gives rise to the creation of a fiction of an alternative future, built on the values of imagination, collaboration, self-sufficiency, and the recovery and reinterpretation of an ancestral popular science.

The artistic practice of Tamás Kaszás is marked by the construction of large-scale installations that the artist calls Visual Aid, where drawing, photography, video, text and small objects are brought together. The artist uses techniques and materials that are simple, accessible, recycled or inexpensive that echo the formal language of the European avant-garde of the 1920s and activist movements of the 20th century.

His work summons up the concepts of ecological sustainability, auto-anthropology, escapism, history and utopia. For Tamás Kaszás, art (or its use) is first and foremost ‘an instrument for living’ (or surviving), an emancipatory instrument for a ‘simple and happy life’, a position that implies a critique of global capitalism, consumerism and the loss of autonomy of the contemporary subject.

Tamás Kaszás’s career is also marked by several collaborations with other artists, including a prolific collaboration with Anikó Loránt, with whom he formed the Ex-Artists’ Collective in 2003. It is within the framework of this collaboration that he develops the projects Auto-Anthropology (2010-2017) and Famine Food (2011-2017), which are central to the exhibition. Joy of Surviving also features a collaboration with the artist Sophie Dodelin in the context of the project Disco Batata (Discoteca Tuberosum) [Disco Potato – Discoteca Tuberosum] (Caparica, 2008-2017).