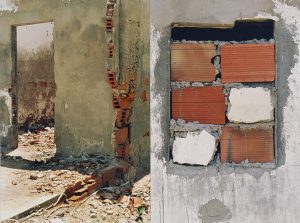 This retrospective exhibition examines the work of António Ole, who has been a guiding figure for an entire generation of contemporary Angolan artists. The work of this internationally renowned artist ranges from sculpture to installation, from painting and collage to drawing, and from photography to film, maintaining a permanent dialogue with the city (above all Luanda), its architecture and its inhabitants.

One of the highlights of the exhibition is António Ole’s film production, a little-known body of work that he started in 1975 (the year after Angola gained independence from Portugal) and continued working on into the 1980s and 1990s.

Luanda, Los Angeles, Lisboa sets up an experiential geography that traverses or creates bridges between the key cities in António Ole’s artistic career. The artist was born in 1951 in Luanda, Angola, where he currently lives and works. After studying Cinema at the American Film Institute of Los Angeles (1975) and African-American Culture at the University of California Center for Advanced Film Studies (1981-1985), António Ole held his first international exhibition at the Museum of African American Art in Los Angeles, initiating a series of reflections on slavery and colonialism.

The exhibition establishes a strong dialogue with the space that houses it, in which installations, films and paintings intersect through the ideas of exchange and the container.

He has staged exhibitions at several international institutions and also participated in the 55th Venice Biennale in 2013. He will be returning to Venice in 2015, appearing in the Angola Pavilion alongside other young artists from his country. He has won various awards in Angola, Portugal and Cuba and his work can currently be found in countless public collections in Portugal, Angola, South Africa, the United States, Germany and Cuba.