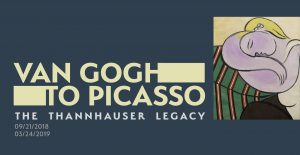 The Thannhauser Legacy, featuring the celebrated Thannhauser Collection gifted to the Solomon R. Guggenheim Museum, is marking the first time the majority of the collection as such leaves New York to be exhibited elsewhere since its arrival at the Guggenheim in New York in 1965—over 50 years ago. With the exclusive sponsorship of Fundación BBVA, the show includes some 50 works by a number of the most well recognized Impressionists, Post-Impressionists, and modern masters, such as Paul Cézanne, Edgar Degas, Édouard Manet, Pablo Picasso, and Vincent van Gogh.
The Thannhauser works bring to the fore avant-gardists who sought to liberate art from academic genres and techniques in the late nineteenth century. These artists explored the fleeting effects of nature and ways to capture the spectacle of the changing city at the start of the 20th century, and employed stylistic devices such as loose brushwork and innovative practices like fracturing and faceting the picture plane.
In addition to paintings, sculptures, and works on paper, the exhibition includes archival material ranging from gallery stock books to historical photographs, further documenting the Thannhauser family’s engagement with some of the most pioneering artists, collectors, and dealers of their day.
The Thannhauser Collection played a major role in expanding the range of the Solomon R. Guggenheim Foundation’s holdings to include the immediate precursors to the modern era. As prominent dealers in Germany in the first decades of the 20th century, the Thannhauser family not only made a commitment to local contemporary artists, but also they organized important group and solo exhibitions featuring French avant-gardists from the late 19th century, including Paul Cézanne, Edgar Degas, and Édouard Manet.
The Thannhausers’ assembling of European art of the fin-de-siècle captures the diversity of artistic styles that emerged in reaction to the two dominant strains in art at the time: academic naturalism and the Impressionist adherence to the natural world. Artists such as Paul Gauguin and Vincent van Gogh, both subjects of critical exhibitions organized at the early Thannhauser gallery in Munich, turned their artistic eye inward.
A special relationship with Picasso
By the 1930s, Picasso is a renowned and established artist and his practice continues to evolve. Collector and dealer Justin K. Thannhauser had a strong personal relationship with Picasso that started early in both men’s careers, in February 1913, when the Thannhauser family gallery in Munich mounted one of the first major Picasso exhibitions in Germany. More than 30 works by Picasso—spanning 65 years of the artist’s career—entered the Guggenheim Foundation’s collection in 1978 and 1991 with the respective donations of Justin K. and Hilde Thannhauser.
Curator: Megan Fontanella, Curator, Modern Art and Provenance, Solomon R. Guggenheim Foundation.