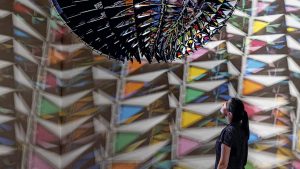 The Guggenheim Museum Bilbao presents Olafur Eliasson: In real life, a survey of the career of Olafur Eliasson (1967), one of today’s most prominent artists. Through around 30 works created between 1990 and 2020—including sculptures, photographs, paintings, and installations—the exhibition challenges the way we navigate and perceive our environment, leading us to reflect on the urgent issues of today.

Eliasson’s art derives from an interest in perception, movement, embodied experience, and feelings of self. Central to his artistic practice are his concern with nature, inspired by time spent in Iceland; his research into geometry; and his ongoing investigations into how we perceive, feel about, and shape the world around us. His practice extends beyond making artworks and exhibitions to include public interventions and architectural projects.

Eliasson’s Berlin-based studio brings together a diverse team of skilled craftspeople, architects, researchers, chefs, art historians, and specialized technicians. It is a place not only for artistic creation but also for encounters and dialogues with cultural practitioners, policymakers, and scientists. Convinced that art can have a strong impact on the world outside the museum, Eliasson has created solar lamps for off-grid communities, conceived artistic workshops for asylum seekers and refugees, created art installations to raise awareness of the climate emergency, and in September 2019, he was named Goodwill Ambassador for the UNDP. “Art is not the object but what the object does to the world.”

Outside the museum, a waterfall more than eleven meters tall, constructed from scaffolding and pumps, cascades into the pond behind the museum, conjuring the same sounds and appearance of a waterfall in nature. This work shows Olafur Eliasson’s fusion of nature and technology and leaves the mechanism behind the work exposed to view, drawing visitors’ attention to the “constructed nature” in an urban setting.