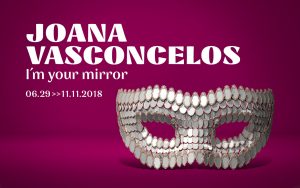 The exhibition includes previously unseen works like I’ll Be Your Mirror, an enormous Venetian mask formed by mirrors framed in bronze, and Solitaire, a gigantic engagement ring made from the wheelrims of luxury cars and glass whisky tumblers, thus combining some of the most stereotyped symbols of masculine and feminine desire.

–Egeria, a work which spreads through the Atrium of the Museum like a plant made of different fabrics, colors and textures, constitutes a metaphor for the occupation of museums by women.

The Guggenheim Museum Bilbao presents the exhibition Joana Vasconcelos. I’m Your Mirror, a selection of 30 works produced between 1997 and the present day by the most internationally reputed Portuguese artist, including a site-specific installation for the Atrium of the Museum and various other new works. In this show, sponsored by Seguros Bilbao, viewers can submerge themselves completely in the universe of an artist with a direct and humorous vision of the world, whose work explains many of our society’s contradictions without any apparent effort.

Some of Joana Vasconcelos’ works are extraordinarily complex: they move, make sounds, or light up. These complications are resolved by the artist in her 3400 m2 Lisbon studio with the assistance of a team of more than 50 permanent collaborators. Vasconcelos uses a wide variety of materials from everyday life to make these works, such as household appliances, tiles, fabrics, pottery, bottles, medicines, urinals, showers, kitchen utensils, telephones, cars, and plastic cutlery. With them the artist constructs light-hearted yet strikingly direct images that refer to socio-political issues relevant to post-colonial, globalized and consumerist societies, addressing issues that range from immigration to gender violence. There is always a sense of humor, and the pieces suggest open, non-dogmatic meanings similar to the relational aesthetics that emerged in the late 1990s, since they too require the viewer to participate actively in the perception and interpretation of the artwork.

Rich in external references, from Louise Bourgeois to popular culture, from the goldsmith to the fashion designer, and from handicrafts to cutting-edge engineering, Vasconcelos’s oeuvre addresses identity in all its dimensions, among other key issues, and reflects on her position as a woman and a Portuguese and European artist. Other fundamental aspects of her work are the relationship her pieces establish with the architecture in which they are displayed, a metalinguistic reflection on the nature of the artwork, and the inclusion of purely poetic elements.
–Like an alchemist of daily life, the artist transforms the everyday objects and clichés of the consumer society into open artworks laden with meaning.