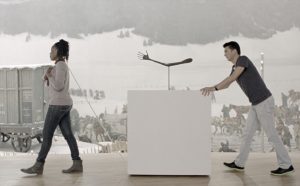 The work of New York-based artist Javier Téllez (b. 1969, Valencia, Venezuela) investigates the history of the moving image—its icons, social norms, and specific relational forms—while it systematically tackles institutional dynamics, disability, and mental illness as states of marginalization and cultural invisibility. Individuals living on the edges of the social and rational canon thus critically take part in the production, writing, and performance of Téllez’s film works and installations, as it is the case of the two works presented from July 12 through November 15 at the Guggenheim Museum Bilbao, in the second iteration of of this year’s Film & Video exhibitions program. Both Bourbaki Panorama and Shadow Play—from which the exhibition borrows its title—are the result of a collaboration with refugees seeking asylum in Switzerland, and were produced for the Kusthaus Zurich in 2014.

Bourbaki Panorama is a silent 35-mm film that shows a group of refugees wandering in circles within one of the most important painted panoramas of European history. The immersive mural from 1881, permanently mounted in the city of Lucerne, depicts the alpine exodus of 87,000 French soldiers in pursuit of asylum after their defeat at the hands of Prussian troops, in what is considered the first defining moment in the history of Switzerland’s geopolitical neutrality and its vocation as a country of asylum. Téllez’s piece makes a stage of this grand-scale tableau where historical ambition and the pre-cinematographic spirit of the nineteenth century seem to converge. In this space, a group of people—all of them actual refugees—wander as if trapped in the loop of history. One amongst them pushes a bronze sculpture: Alberto Giacometti’s The Hand (1947), a work that was created as an evocation of the terrible sight of an arm amputated by an explosion. The presence of this piece in such a context invites multiple readings: the breakdown of the social body, the communal and marginal role of migrants, or their alienation from the history and heritage of the place of asylum. Meanwhile, it suggests the idea of the artwork itself as a migrant object, taking refuge in the museum where it is protected from the conflicts of the outside world. The constant motion of the film through the enormous 35 mm projector also replicates the circular movement of migrants around the mural, while its noisy operation brings up echoes of war machinery.

Presented together with this work is Shadow Play, again a silent 35 mm film featuring a group of refugees who participate here as actors and screenwriters. The film recounts the hardships each member of the crew has gone through by means of brief, symbolic fables. Using only their bodies and hands, these figures express themselves with minimal means. The absence of sound or words in the narration highlights not exactly the muteness, but rather the deprivation of speech that defines the refugee’s existence, as it is often excluded from the social and political life of the country of asylum. In the meantime, each of the individual stories manifests the age-old archetypes of exile: destruction, oppression, censorship, misery, and death. Just as in its companion work, Giacometti’s Hand irrupts into Shadow Play—although this time in its original plaster version. Transformed into a black shadow projected against the screen, the sculpture—both threatening and fragile—serves as a narrative agent while altering, with its unmistakable silhouette, the abstraction and universality of traditional shadow drama.