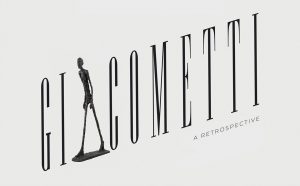 The Guggenheim Museum Bilbao presents Alberto Giacometti. A Retrospective, an exhaustive exhibition of more than 200 sculptures, paintings, and drawings by Alberto Giacometti (1901–1966), one of the most influential artists of the 20th century, throughout 40 years of his artistic output. The show offers a unique perspective on the artist’s oeuvre, with a particular focus on the extraordinary collection of art and archival materials conserved by the Fondation Giacometti in Paris, which was assembled by the artist’s widow, Annette.

Alberto Giacometti was born into a family of artists in Switzerland in 1901. His father, the well-known Neo-Impressionist painter Giovanni Giacometti, who is depicted in three head sculptures by the young Alberto, first initiated him into painting and sculpture. In 1922, he moved to Paris to further his artistic training. Four years later, he moved into the studio where he would remain until his dying days, a rented space just 15 x 16 feet on Rue Hippolyte-Maindron near Montparnasse. In this narrow, tiny space, Giacometti created a highly personal vision of the world around him.

The human figure is a core subject in Giacometti’s works. Over the years, he created works inspired by the people around him, essentially his brother Diego, his wife Annette, lovers, and friends. “Sculpture, painting and drawing have always helped me to understand my vision of the outside world, especially the face and the human being as a whole. Or put more simply, my fellow beings, and especially those who are close to me for one reason or another.”

Giacometti’s ideas on how to approach the human figure have become essential questions in contemporary art for subsequent generations of artists.

The exhibition Alberto Giacometti. A Retrospective underscores the artist’s interest in malleable materials like plaster and clay. While many creators limit themselves to using plaster as an intermediate working material as they produced a work—after shaping the object in clay but before rendering it in bronze—Giacometti often used this material for both the initial shape and the definitive form of the object. A good example of this is the exceptional set of eight plaster sculptures entitled Women of Venice which will be presented at the Guggenheim Museum Bilbao for the second time since it was created for the 1956 Venice Biennale, and which was displayed at the Tate Modern in London in 2017 after being restored by the Fondation Giacometti of Paris.

Exhibition organized by the Guggenheim Museum Bilbao in collaboration with the Fondation Giacometti, Paris