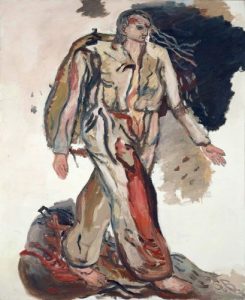 George Baselitz (b. 1938) is without question one of the most influential painters and sculptors of our time. In 1965 and 1966, in a virtually explosive spurt of productivity, he developed his dramatic and paradoxical Hero paintings. Today, the forceful workgroup of the Heroes and New Types is universally regarded as a key example of German art from the 1960s. This monographic exhibition, organized by the Städel Museum, Frankfurt, in collaboration with the Guggenheim Museum Bilbao, will be the first comprehensive survey of the keys to this series, whose aggressively, defiantly painted monumental figures have lost nothing of their ambiguous, portentous, vulnerable quality. However, Baselitz was concerned here with far more than general social issues—he was also reflecting on his own position in relation to society.