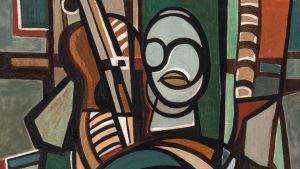 A pioneer in abstraction, Lygia Clark (b. 1920, Belo Horizonte, Brazil; d. 1988, Rio de Janeiro, Brazil) was a major artist of the second half of the twentieth century. Lygia Clark: Painting as an Experimental Field, 1948–1958 presents a reexamination of Clark’s crucial formative years from 1948 to 1958, when she was experimenting between figuration and abstraction to articulate the compelling visual language that defined her mature production. Along with a pertinent representation of her early figurative work, this exhibition assembles paintings from major series created during this early period to provide a fundamental overview of the first decade of Clark’s artistic career.

Viewing painting as an “experimental field,” a phrase from a keynote lecture given by the artist in 1956, Clark sought to redefine the medium by pushing the boundaries of traditional painting. Dedicating herself to art without formal training, she embedded herself within the artistic milieu of Rio de Janeiro in the late 1940s and participated in seminal artistic movements, such as Concrete art and geometric abstraction, throughout the 1950s. This focused exhibition traces Clark’s artistic evolution in three structured historical sections: “The Early Years, 1948–1952;” “Geometric Abstraction, 1953–1956;” and “Variation of Form: Modulating Space, 1957–1958.” Each chapter addresses Clark’s most significant ideas and provides an in-depth representation of her artistic development through a concise selection of works.

This presentation of Lygia Clark’s early practice debuts on the centenary anniversary of the artist’s birth, bringing a renewed attention at an international level to a significant postwar Latin American female artist. The museum is thankful to the Lygia Clark Cultural Association, Rio de Janeiro, and the artist’s heirs for their tremendous support of the exhibition.