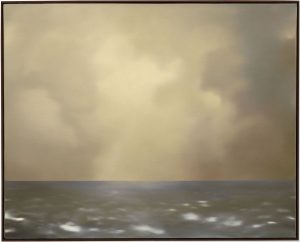 Gerhard Richter (b. 1932) was born shortly before the outbreak of World War II in Dresden, which would become a part of East Germany following the end of the conflict. His interest for the Informalism and Expressionism that were developing on the other side of The Wall quickly led him to abandon his hometown. After establishing himself in Düsseldorf, he made “his first paintings based on photographs,” through which he sought a “new beginning,” and although he had previously created pieces in this style, Richter considered that the photo paintings from before 1962 belonged to the past. Within this category, the Seascapes was a series that Richter worked on from the end of the 1960s up until 1998, the date of Seascape (Seestück), a piece in the Guggenheim Museum Bilbao’s Collection.

This exhibition will be the first to present a broad variety of these works, in which the artist relies both on traditional sources—such as the melancholy and moody landscapes of German Romantic painter Caspar David Friedrich—as well as the popular snapshots taken while on vacation, in order to present a reflection on nature and visual perception. Through these paintings and drawings, Richter forces us to face the problem of representation, merging the painted surface and the photographic record into one. To do so, he applied highly diluted paint, achieving the smooth surface of a photograph, and like in many instant photos, he unfocused the image to make it more difficult to distinguish whether it is a photograph or a painting. In some of these works, the sea and the sky from different sources merge, becoming almost interchangeable, leaving it up to our perception to identify which is which.