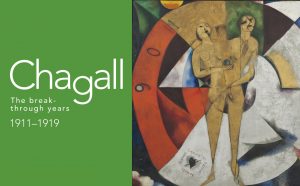 This exhibition, featuring more than 80 paintings and drawings from the early career of a unique artist, whose seemingly simple universe conceals a complex reality where opposing worlds intertwine, has been organized by Kunstmuseum Basel in collaboration with the Guggenheim Museum Bilbao.

Born in 1887 to a Hasidic Jewish family in the small town of Vitebsk, then under the control of the Russian czars, Marc Chagall grew up in a very confined world, where access to Russian culture and art was limited by his own community and the government policy of relegating Jews to ghettos and denying them basic rights. Even so, the young Marc Chagall soon made a break with convention, securing a place in a Russian school, studying art with Yehuda Pen in Vitebsk, and later moving to St. Petersburg, a major city which Jews could only enter with a special permit.

However, the decisive turning point for Marc Chagall came in 1911, when he moved to Paris and began a new life there. He worked in the French capital for three years, until May 1914, producing works that combined recollections of life in the Hasidic community of Vitebsk with the icons of the modern metropolis. Thus, reminiscences of Russian folk art intermingled with the most progressive stylistic experiments of Parisian avant-garde leaders like Pablo Picasso, Robert and Sonia Delaunay, and Jacques Lipchitz.

In 1914 Chagall returned home to attend his sister’s wedding and see his fiancée, Bella Rosenfeld, but the unexpected outbreak of World War I turned what was supposed to be a short visit into an eight-year confinement. At that point, the artist entered into a phase of intense soul-searching that is reflected in his works from this period, comprising self-portraits, everyday depictions of his family and community, drawings of the ravages of war, and images of the new Russia that emerged after the October Revolution.