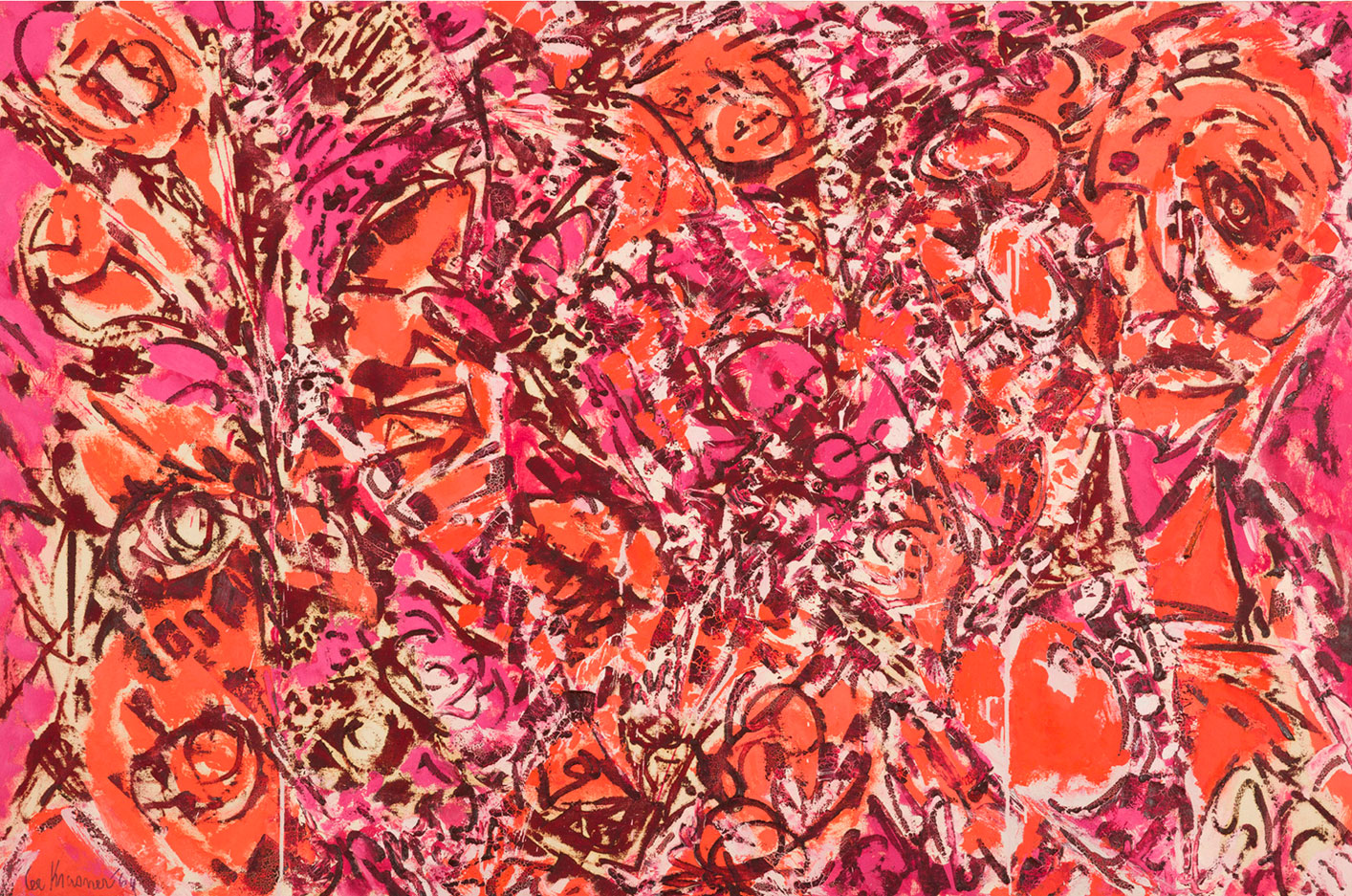 Lee Krasner (b. 1908; d. 1984) was a pioneer of Abstract Expressionism, the movement that made New York a thriving center for modern art in the postwar period. Born in Brooklyn, in an Orthodox Jewish, Russian émigré family, she decided to become an artist at 14. She applied to the only school in New York that offered an art course for girls and would later study at the Cooper Union, the National Academy of Design, and the Hans Hofmann School of Fine Arts.

Krasner was one of the first artists in New York to adopt an entirely abstract approach, and in 1942 she was included in the exhibition American and French Paintings at the McMillen Inc., alongside her friends Willem de Kooning and Stuart Davis. The one fellow exhibitor that she had not met before was Jackson Pollock, so she decided to visit his studio. In 1945 they married and moved to Springs, Long Island.

Unlike many of her contemporaries, Krasner refused to develop a ‘signature image,’ which she considered to be too rigid. Working in cycles, she sought out new means for authentic expression, even during the most tumultuous of times, including Pollock’s sudden death in a car crash in 1956. Krasner’s formidable spirit is felt throughout the body of work that she created over more than fifty years in the studio.

Lee Krasner. Living Colour, which is the first exhibition of her work in Spain, brings together exceptional works from across her entire career: from her early self-portraits and life drawings to her collage designs for the War Services Project; to the vibrant ‘little image’ paintings of the late 1940s; to the bold collages presented at the Stable Gallery in 1955. In the summer of 1956, Krasner made a painting dominated by looping, fleshy forms, lined with black and with accents of pink that emphasize the bodily imagery, Prophecy. The same summer she found herself a widow, but she returned to her painting, making three works that continued the Prophecy series. The year after she began her ‘Night Journeys’, works of an unprecedented scale, with a restricted palette of white and umber. In the early 1960s, Krasner allowed colour to burst back into her painting and created airy and exuberant monumental works and striking collages made from shards of previous paintings.

Spanning a career of fifty years, Krasner’s oeuvre was characterized by constant reinvention and unceasing exploration. She died in June 1984.

Exhibition organized by Barbican Centre, London in collaboration with the Guggenheim Museum Bilbao.