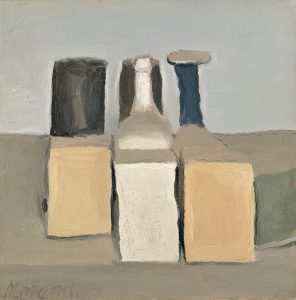 From his years as a student at the Academy of Fine Arts in Bologna, Giorgio Morandi centered his practice on engraving and painting landscapes and still-lifes, which account for much of his output. Initially influenced by the Italian masters (Giotto, Uccello, Masaccio) and later by Cézanne, Cubism, and Futurism, his work gradually acquired a metaphysical orientation. In 1920, he began to investigate the world of objects (bottles, vases, boxes) and landscapes, reduced to their most elementary sobriety. His quintessential figurative painting is unlike any other 20th-century pictorial oeuvre, possessing a unique intensity, beauty, and timelessness. Morandi’s still-lifes, inspired by the most mundane objects and highly personal in terms of composition, color, and light, take his zeal for purity, concentration, and the essential to an extreme level. As the artist himself once said, “One can travel the world and see nothing. To achieve understanding it is necessary not to see many things, but to look hard at what you do see.” This exhibition will cast new light onto Giorgio Morandi’s work, approaching it from a perspective not seen in any other show to date, analyzing the influence on his work of the old masters of the Spanish (El Greco), Bolognese (Jacopo Bassano, Giuseppe Crespi) and French (Jean Siméon Chardin) Schools from the 16th, 17th, and 18th centuries.