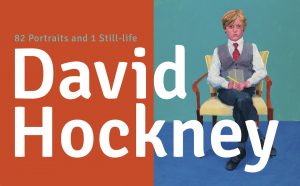 This exhibition is featuring a remarkable new body of work in which the British artist returns to portraiture with a renewed creative vigor, offering an intimate snapshot of the LA art world and the people who have crossed his path in recent years.

After the monumental and highly successful landscape exhibition David Hockney: A Bigger Picture at the Guggenheim Museum Bilbao in 2012, the artist turned away from painting and his Yorkshire home and returned to Los Angeles. He was recovering from a very difficult series of events, including a minor stroke, and he did not paint for some time, which was unusual for him. Little by little, he became reacquainted with the quiet contemplation of portraiture, and in the summer of 2013 he painted the first of what was to become a collection of over 90 portraits, 82 of which can be seen in this exhibition.

Hockney views these portraits collectively as a single body of work. The installation in near-chronological order permits another psychological study: that of the artist himself. His own emotional state seems to lighten throughout the series, as does his conviction in the format and medium. His subjects—all chosen from among his friends, family, and acquaintances—include studio staff, fellow artists such as John Baldessari, and curators and gallerists like Larry Gagosian.

“Celebrities are made for photography,” says Hockney. “I don’t do celebrities, photography does celebrities. My friends are my celebrities.” Each depiction—the result of intense scrutiny—becomes a kind of psychological exploration.

Each work is the same size and shows the sitter in the same chair, illuminated by the bright, expansive light of southern California against the same vivid blue background. All were painted in the same time frame of three days.

Thanks to Hockney’s virtuoso paint handling, the uniformity of the key elements in each painting underscores the differences between the sitters, allowing their personalities to leap off the canvas with warmth and immediacy. In this exhibition, Hockney has created an intense, immersive installation that reexamines the role of the painted portrait in an age when selfies and photo-portraits have proliferated in social media. The only non-portrait in the show, a Still-life, was created when one sitter was unable to make his appointment and the artist, primed and ready to paint, decided to portray what was available in his studio, a selection of fruit and vegetables.

Exhibition organized by the Royal Academy of Arts, London, in collaboration with the Guggenheim Museum Bilbao