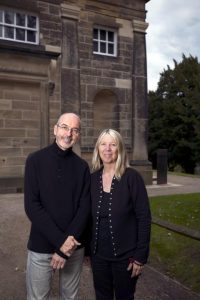 Bill Viola (b. New York, 1951) is one of the leading artists of our time who is widely recognized as a pioneer in the development of video art, a medium he discovered in the early 1970s while enrolled in the “Experimental Studios” program at Syracuse University, New York. Even in his early video works it is evident that Viola’s life’s focus would be the search for self-knowledge as he became more influenced by his readings of Eastern and Western mystics and spiritual texts. His work developed in parallel with the advancements of video technology, and he used each new tool to explore the human condition of birth, death, transformation, rebirth, and transfiguration—pivotal subjects in his body of work that spans 40 years.

Bill Viola: A Retrospective is a thematic and chronological survey of the artist’s career that begins with his early single-channel videotapes, including such iconic works as The Reflecting Pool (1977–79) and the compilation album Four Songs (1976). These highly poetic creations address some of the most important themes in Viola’s output: the notion of time and its deconstruction, investigations into human existence, and experimentation with the recordings and manipulation of ambient and natural sounds.

Viola welcomed the 1980s with works like Chott el-Djerid (A Portrait in Light and Heat) (1979), where his camera captured the shimmering desert landscape using telephoto lenses to record mirages, revealing images normally beyond our perception. This period, in which Kira Perov (his wife and long time collaborator) began to work with Viola, was marked with projects for broadcast television, but it was also a phase of transition from his earlier work into the development of whole room installations that immerse the viewer in images and sound. He began adding physical elements which he continued during the 1990s, his studies of perception and spiritual issues materializing in the form of sculptural objects, as can be seen in the stripped down monitors in Heaven and Earth (1992), and large works such as Slowly Turning Narrative (1992) with its huge rotating screen.

With the arrival of the new millennium and the advent of high-definition flat screens, Viola began producing small and medium-format pieces in a series he titled the Passions, a study of the emotions in slow motion, such as Surrender, or that depict the passage of time and generations, as in Catherine’s Room, and Four Hands (all 2001). These intimate works were followed by the monumental installation Going Forth By Day (2002), in which five huge wall projections share a single space, inviting viewers to literally step into the light and reflect on their own lives and our human existence. The theme of transcendence is present in his video for the Wagnerian opera Tristan und Isolde (2004–05), expressed in the two installations derived from the larger work, Tristan’s Ascension (The Sound of a Mountain Under a Waterfall), and Fire Woman (both 2005).

Over the last decade, through a wide variety of media and formats, Viola has continued in his work to depict the fundamental experience of life. This is eloquently illustrated by his use of water in works such as The Innocents (2007), Three Women (2008), and The Dreamers (2013)—and his journey through the cycle of life, which begins in this exhibition with Heaven and Earth (1992) and literally “rewinds” in the final work Inverted Birth (2014).