Guggenheim Bilbao: ‘Art and China after 1989: Theater of the World’ 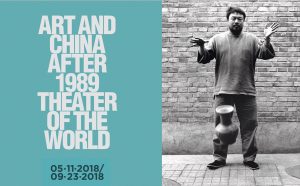 This largest exhibition held to date on Chinese contemporary art during the most transformative period in the country’s recent history, from 1989, the year of the Tiananmen protests, to 2008, when the Olympic Games were held in Beijing. Organized by the Solomon R. Guggenheim Museum, the exhibition provides a fresh interpretive survey of Chinese experimental art in a context framed by the end of the Cold War, the spread of globalization, and the rise of China as a world power.

The show is divided into six thematic and chronological sections, and encompasses a variety of artistic practices, including performance, painting, photography, installation, and video art as well as socially-engaged projects. With a concentration on the conceptualist art practices of two generations of artists, this exhibition examines how Chinese artists have been both critical observers and agents of China’s emergence as a global presence and places their experiments firmly in a global art-historical context.

In the words of Alexandra Munroe, the lead curator of the show, “Art and China after 1989: Theater of the World revolves around key artists, groups, and movements active across China and internationally, whose provocations aim to forge reality free from ideology, to establish the individual apart from the collective, and to define contemporary Chinese experience in universal terms. This focused examination invites us to consider our own recent history through the lens of some of the most thoughtful contemporary artists from China.”

The exhibition, which occupies the whole second floor of the Guggenheim Museum Bilbao, highlights the conceptual and artistic achievements of some 60 artists and collectives and features over 120 artworks on loan from private and public collections across Asia, Europe, the Middle East, and the United States, as well as from the Guggenheim’s collection.