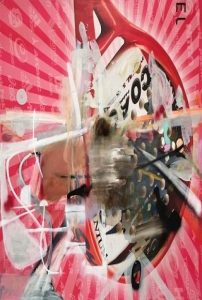 The Guggenheim Museum Bilbao presents Albert Oehlen: Behind the Image, a powerful artistic statement by one of the most influential painters of recent decades and one of the most controversial artists of postwar Germany.

The contemporary pictorial style of Albert Oehlen (b. 1954, Krefeld, Germany) is an amalgam of methods borrowed from the advertising industry, Expressionist brushwork, Surrealist gesture, and computer-generated images. With his work Oehlen fuels the recurring debate begun in the second half of the 20th century about the death of painting, and he does so precisely by using painting as an expressive medium.

In recent years, his paintings have attained what the artist defines as his main subject matter: artistic freedom. This liberty is evident in the way he fearlessly approaches each canvas, using techniques with old vocabularies to create the uncanny, paradoxical sensation of “familiar novelty.” In this respect, Albert Oehlen is not concerned with the meaning of his works, how they might be interpreted by spectators, or whether the audience engages with them; he just tries to experiment and create something different every time he faces a blank canvas.

This exhibition, conceived as an artistic statement rather than a conventional retrospective, consists of two self-portraits and three series. The first of the series, abstract in nature, dates from the 1980s; the second comprises computer paintings from the 1990s; and the third, still in progress, revolves around the theme of trees. The show explores “the extent to which we are capable of seeing behind the image,” for although the works are formally different at first glance, these three series have a common core that unites and connects them, generating a network of interrelationships