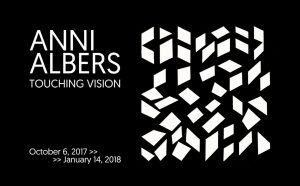 This in-depth survey of seven decades in the career of a pioneering figure in the field of Fiber Art is organized in collaboration with The Josef and Anni Albers Foundation, the show provides a chronological overview of Albers’s oeuvre while also revealing the connections between different periods and series, highlighting recurrent motifs and flashing ideas. Also emphasized are the compelling ways in which a deep insight of materials and techniques preceded visual development in many instances of Albers’s work.

The life of Anni Albers (b. 1899, Berlin; d. 1994, Orange, Connecticut) was marked by an intimate relationship with the materials and mediums that guided her work. Best known for her work as a textile artist, her innovative treatment of warp and weft, and her constant quest for new patterns and uses of fabric, Albers was instrumental in redefining the role of the artist as a designer. Her art was inspired by pre-Columbian arts and modern industry, and transcended conventional notions of craftsmanship and gender-specific labor.

In 1922, Anni Albers joined the Bauhaus school of Weimar, an avant-garde institution where she would also meet her husband, the painter Josef Albers. A hard-working student and gifted weaver, she went on to assist professor Gunta Stölzl and served as acting director of the weaving workshop several times between 1929 and 1931. After the institution was closed by the Nazi party in 1933, the Alberses moved to North Carolina, where they were both hired to teach at a free-form school that would become a benchmark of modern American art, Black Mountain College. There Anni Albers continued to combine her educational activity with artistic experimentation, while also authoring texts that are now considered to be seminal in the history of contemporary textile art. After showing her wall hangings and pictorial weavings in numerous solo exhibitions (MoMA in New York and other American museums between 1949 and 1953, and at the Massachusetts Institute of Technology in 1959), in 1963 Albers began to explore different techniques and processes in printmaking.

Albers discovered a new field of investigation in the wide range of printing practices, and by the late 1960s she had abandoned weaving altogether to focus on this new interest. Screenprints, etchings, lithographs, and offset prints gave the artist a new means of developing visual concepts that had already surfaced in many preparatory drawings for earlier fiber pieces. In printmaking, she found the ideal vehicle for testing new compositional patterns and exploring their almost infinite variations.

In the following decades, and until the end of her career, Anni Albers collaborated with various textile manufacturing companies and workshops in an attempt to make her designs available to a larger number of people, thus reaffirming her commitment to the guiding principle of the Bauhaus: to view art and design as a single field, and produce prototypes that would facilitate an egalitarian distribution of artistic forms.