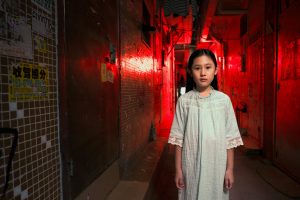 This first solo exhibition of Omer Fast (b. 1972, lives and works in Berlin) in mainland China,is  showcasing a selection of acclaimed works by the artist since 2011, but also marks the public debut of Omer Fast first VR film The Invisible Hand (2018), which is commissioned by Times Museum and produced in the city of Guangzhou.

The exhibition situates Omer Fast’s four films, including 5000 Feet is the Best (2011), Continuity (2012), August (2016), The Invisible Hand (2018), in theatrical sets which partially reenact semi-public interiors of the residential compound that Times Museum is located, as well as generic, transitional spaces such as hotel and hospital corridors. The immersive and disorientating reconstruction of fiction and reality, and the restaging of continuity and rupture are also featured in the specific presentation of The Invisible Hand (2018). The version shown in Times Museum is a VR film installation that mirrors the surrounding environment of the museum with filmic scenes of the story. Originated from a Jewish medieval fairy-tale, the story itinerates into a contemporary urban fable narrated by an 8-year old Chinese girl, where the invisible hand of a ghost granted the family’s material prosperity but eventually caused an ethical and social breakdown. The script is inspired by the artist’s visit to Times Museum and its neighborhood in 2017, and metaphorically registers paradoxes of prosperity and loss, truth and lies, freedom and control. Facilitated by virtual reality technology, audiences are drawn into situation to witness the tragic-comic development of the protagonist’s life and the massive socio-economic changes in China. With the artist’s reconfiguration of audiovisual materials, the fragmented, illusional and seductive nature of our mediated world is pushed to right in front of our face.

Born in Jerusalem and grew up in New York, Omer Fast’s captivated cinematic languages and scenographic settings have not just pushed the boundaries between fiction and documentary in the realm of moving image, but also addressed and accommodated nuance, ambiguity and conflictual construction of truth and identity vis-à-vis the global crisis of representation and essentialist tendency. Known for his complex manipulation of images to investigate how experiences and memories are turned into aesthetic and political regime, Omer Fast recent projects critically deploy up-to-date apparatus with the convention of storytelling to challenge the presupposed progressiveness of technology and internet intermediacy.

The exhibition is curated by Nikita Yingqian Cai (chief curator of Times Museum), who is also the producer of The Invisible Hand. It is organized as the first initiative of a series of upcoming solo exhibitions and commissioning projects. By inviting mid-career international or Chinese artists to engage with the challenging spatiality and context of Times Museum and go beyond the temporality of exhibition making, Times Museum is dedicated to consolidate diverse agencies of artistic production and promote alternative perception and circulation of contemporary art in China.