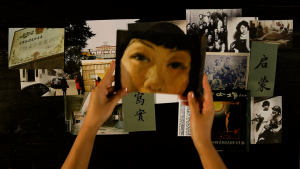 Mia Yu, This is Not Serious Art History…

The social network of Pan Yuliang’s early career as a modernist artist and an art educator in the period of the Republic of China resonated with larger social-political movements at that time: from the cultural construct of “New Woman,” the New Culture Movement, to the revolution and reform launched by the Nationalist Party and early Communists; from the rise of modern nationalism in China after the end of WWI till the Japanese Invasion in 1937, to the decline of Paris as the cultural capital of the world after WWII. While many of her male peers and acquaintances with western educational background advocated their social, political and cultural visions in public, and made their way into mainstream history, Pan Yuliang’s own accounts related to major decisions on changes in her life and her artistic motivation are nowhere to be found. Pan Yuliang and her paintings were neither part of the canonical narratives of western modern art history nor were the mainstream in the state-funded museum system in China; on the other, the internet search results about Pan Yuliang turns out to be inexhaustible, regurgitating the same biography based on mass culture reproduction with little new insight into her life and artistic adventure. Both as object of phallocentric and ideological construction and as subject of modern emancipation, Pan Yuliang is inevitably marked as the Other in her country of origin as well as in Europe.

The first chapter of Pan Yuliang: A Journey to Silence opened in May at Villa Vassillief invited artists Hu Yun, Huang Jing Yuan, Wang Zhibo and art historian Mia Yu to form a research group that functions as a collective subjective agency. Art historical papers and essays of gender and cultural studies; archival clippings of newspaper reviews in the 1920s and 1930s; discussions and interviews with researchers and scholars; catalogues, publications, websites, blogs and exhibitions dedicated to Pan Yuliang; novels, TV dramas, documentaries and films about Pan Yuliang and female artists alike; original pieces, printed matters and digital copies of Pan Yuliang’s works are all treated as equal sources and materials for investigation and presentation. Spivak was right in suggesting that “the archival, historiographic, disciplinary-critical and, inevitably, interventionist work involved here is indeed a task of ‘measuring the silences.’”

In September, the journey of Pan Yuliang is unfolded as the second chapter at Times Museum. Besides presentation of the former research participants’ extended editions based on their Paris encounter and reflection, new commissions from Theatre 44, Fang Lu, Qin Jin and Song Ta have been developed to expand the biographical departure. Deviating from the idea of representing Pan Yuliang by claiming new authority in the conventional model of retrospective, Pan Yuliang as the protagonist of the exhibition is presented without her original works, so as to investigate the gender bias and absence of female subjectivity in historical writing and mass media. Artistic research, mediations and speculations are displaced in the journey of Pan Yuliang, which situates her self-emancipation and constructed biography within contemporary motifs and cosmos, and projects her unique trajectory upon women artists’ representation in the global cultural arena.